Matter fact, at a Howard hip-hop conference in 1991, Malik Shabazz referred to me as an “Uncle Tom.” (Guess why?)

I ain’t mad at him. Because Malik – clever Malik, beautiful Malik – CLOWNED SEAN HANNITY on “Hannity & Colmes” last week! And it went a little sumpn’ like this:

For the past week, Sean Hannity has been waging a campaign of “guilt by association” against Barack Obama, drum-beating the names of Jeremiah Wright and Louis Farrakhan to smear Sen. Obama as a black militant.

Even Jack Kemp, a Republican, whacked Hannity on the snout Friday night for his constant “ad hominem attacks” against Obama. 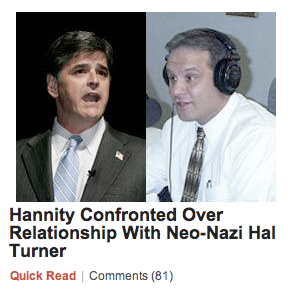 The problem with playing the “guilt by association” game is... it puts one’s own associations on the table.

So let’s talk about Hal Turner, one of the most notorious bigots on the Internet. Turner’s blog and radio call-in show are a phantasmagorium of race-baiting, Jew-baiting, queer-baiting and immigrant-bashing.

“Jews hate this program,” Turner said on his show last Wednesday night, “because I expose them for the scumbags that they are.”

Before we get to Turner’s connection with Sean Hannity, I’d like you to hear a few snippets from Turner’s radio show last week. I’ve done a 4½-minute edit. Turner’s theme for the evening was the imminent economic and social collapse of the United States.

Click here to listen. (WARNING: Foul language and epithets.) It ends with a surprising mention of Malik Shabazz’s appearance on “Hannity & Colmes” that same evening.

Now... what does this deranged individual, Hal Turner, have to do with Sean Hannity? During the 1990s, Turner was one of Hannity’s favorite callers to Hannity’s radio show. And a friendship grew from that.

Liberal writer Max Blumenthal documented their relationship three years ago in an online article for The Nation.

And Turner himself blogged about it this weekend. “Yes, we were friends and yes, Sean agreed with some of my views,” Turner wrote.

“In 1993, My wife got pregnant and around a month later, Sean reported that he and his wife were expecting their first child,” according to Turner. “We got to talking about things expectant dads talk about and the relationship grew. ...

“Over the course of the next three or four years, Sean and I spoke regularly off the air about our kids, politics and news of the day. My on-air calls to his show remained regular and welcome.”

Around 1997, Hal Turner says, “Sean invited me and my then-three-year-old-son, to come to Fox News Channel to be in the studio (NOT ON THE AIR) during a live broadcast of ‘Hannity & Colmes’. I accepted the invitation and my son and I went.”

According to Turner, his phone calls were no longer welcome after he ran for a New Jersey congressional seat in 2000.

But dig this: “I can tell you from my firsthand, personal experience that Sean Hannity does, in fact, agree with many of my political and social views,” Turner blogged.

“[H]e and I exchanged the kinds of views that most White, Irish-Catholic guys hold, but won’t speak in public.”

Turner continued: “It seems to me that a big difference between Sean and me is that I am willing to say publicly what I think about savage Black criminals, diseased, uneducated illegal aliens and the grotesque cultural destruction wrought by satanic jews while Sean and many others keep quiet to protect their paychecks.”

What say you to this, Sean Hannity? Do you “denounce and reject” the bigot Hal Turner? Or do you, in fact, share his world view? And is that the reason you persist in smearing Barack Obama?

For now, Mr. Hannity, all we have to go by are Hal Turner’s own words. Including these: 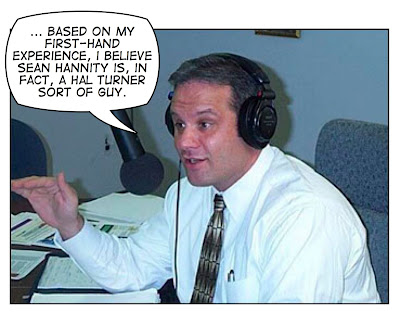 I can't believe this Turner guy. He's actually calling for hits on govt officials. WTF? Why is he not in jail?

I don't normally go in for the conspiracy angle, but only a white guy could get away w/ this kind of mess.

That Hannity/O'Reilly style of whatever it is they do drives me nutty. I can't imagine trying to have an actual conversation with either of them. I'd hope to deity there weren't any objects larger than a fist or weighing more than a pound within my reach or I'd probably be tried for murder.

Thanks UBM, now I can go to sleep laughing.

Here's something Hannity will never mention about Wright.

What people quick to judge Jeremiah Wright as an "anti-white America hating racist" might not know is that in 1966 he served as a cardio pulmonary technician at the U.S. Naval Hospital in Bethesda, Maryland.

Of what significance is that? It was during this time that President Lyndon Baines Johnson, a white American President, went into surgery and found himself in the hands of Jeremiah Wright. What an excellent opportunity to enact his master plan! Kill the evil American and take over the US for crazy extremists. Mwah ha ha ha ha! Instead - Pastor Wright recieved special commendation for his work on President Johnson. I guess he's not so evil afterall.

Link includes pic of Wright working on Johnson and also a link to a special recommendation Wright received for his work.

I'd never heard of Hal Turner but it's startling to know that we have ALL types influencing the airwaves and internet bandwidths.

And Hannity got clowned indeed. He's not running for President but he has a broad sphere of influence and so what's good for the goose...

I would love to see Hannity "denounce and reject" Turner. I would love it even more if Turner had recorded any of their conversations, proving Turner is right about Hannity, and played them on air after getting denounced and rejected.

Until then, though: tee hee hee!

I am very, very suspicious of the supposed Weimar-Republic-parallels many seem to discover over in the US lately.

Feels like the other side of this Janus face: It's 1938 and whoever is Hitler.

The clip you posted of Turner is disgusting and incredible and odious.

I'm troubled by the fact that one caller was /drawn to the show/ by the Hannity mention.

I suppose it's better to have such things talked about so that those with disgusting beliefs can make themselves known so they can be repudiated by thoughtful people. Sadly, it means they'll get kudos from racist jerks.

Remember that blowhard in Happy Gilmore? The one who said "I eat pieces of sh*t like you for breakfast"? Do you remember Happy's response? "You eat shit for breakfast?" I always think of that when I hear from Hannity and O'Reilly. Big talk - til they get caught all cozied up to a nazi or busted for outright lies.

You can add this to things White People Don't Like.

Hal Turner and his listenership exposing the thought processes of a good deal of white people. (Before you throw a brick, notice I didn't say all. And why am I apologizing a la Obama?)

These are kinds of tidbits that keep creeping out. Which makes the Rev. Wright's comments not so bad but exposes how closely aligned Ferraro's comments were to mainstream.

Now, we can say what we wanna say, but the truth is that race and racism is the elephant in the room that folks don't want to deal with.

It's a disease that ain't been cured. So the ultimate question is, how do we get Black people to resolve that deep wound? And white people to get beyond their hand curled around the knife?

I will say this, I admire some of the white commentors who have been honest enough to admit the crime. And I admire our host for extending the hand to mending the relationship.

And while many view my comments as adversary, they miss the point.

Right now, I'm not giving room to excuses from the white side of the aisle.

However, be assured there are similiar criticisms for the Black side.

But until we can agree where the problem lies, I will continue to direct my critiques on the white side.

Because, unlike, Barack, I'm not running for office. But he posed the challenge for all of us.

If I can step up to the plate, so can others.