Something shocking from Scatman Crothers

I shouldn’t say “shocking” from my own personal point of view. I don’t catch the vapors whenever somebody says “nigger.” But the N-word prohibitionists out there will find it hard to cope with Scatman Crothers singing a ditty called “Ah’m a Nigger Man.”

The following vidclip is the opening title sequence of “Coonskin,” a notorious 1975 film by cartoonist Ralph Bakshi. (Mr. Bakshi, a white man, also wrote the lyrics to “Ah’m a Nigger Man.”) 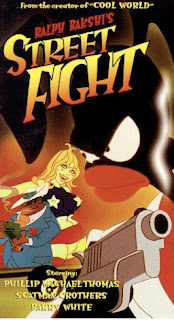 “Coonskin” sparked protests from the Congress of Racial Equality before it was even released. “They were booing at the titles,” Bakshi recalled of an early screening. This, in turn, frightened Paramount Pictures into dropping the movie like it was hot. (The film was re-titled “Street Fight” for home videocassette. It hasn’t yet been released on DVD.)

A re-imagining of the old Brer Rabbit folktales for a blaxploitation audience, “Coonskin” was a gleaming straight razor of a satire... cold, dangerous, skin-slicing.

One of the movie’s biggest fans is Darius James, a gifted satirist his own self. In his book “That’s Blaxploitation!,” James wrote this:

“In ‘Coonskin,’ Bakshi pukes the iconographic bile of a racist culture back in its stupid, bloated face, wipes his chin and smiles Dirty-Harry style. ‘Now deal with it...’ He subverts the context of Hollywood’s entire catalog of racist black iconography....”

Apparently he’s not the only black person who digs it. “Spike Lee is a big fan of ‘Coonskin,’ ” Bakshi told a journalist in 2003. “I get emails from new fans all the time on it; some can’t believe I’m white. ... [R]ap artists like it too.”

As for Scatman’s performance here, I love everything about it... the way he cuts his eyes to the camera a couple of times, the way he subverts certain lyrics, and basically the whole way he embodies a lost era of black music and black style. I think you’ll enjoy this...

hhmm. as usual, u make us think, ubm. to me, that is a protest song. i suppose i have an issue with the commercialization of the word "nigger". deep. way to get me to view scat man in an entirely different light.

thanks for posting this. i've been a huge fan of this movie for a long time, hunting down copies in flea markets. There are some copies on DVD-- Ebay lists some and i've bought copies in record stores in the san francisco bay area.

this song is one of my favorite aspects of the film. i guess this movie pre-dates scatman doing voice work in cartoons, but it really shakes the image i had of him listening to his voice saturday mornings. this is a very subversive film and an insane protest song. the N word here is used like flicking sh*t back into the faces of people who look at us that way, look at us as subservient, dumb. Back us ourselves.

Wow - thank you for passing this along. I will definitely be looking for the movie.

The song and Scatman are wonderfully defiant. Everything about it is calling bullshit on bullshit.

I'm with Judith - I'll never think of Scatman the same way again and I really love the way he's coming through here.

I never realized Scatman could actually scat! I've seen him in so many films and never once thought about the origin of his name. Did he start out as a singer? Because he's really good.

^ You didn't know he could scat from the "Hong Kong Phooey" theme song??

I imagine he paid serious dues in black vaudeville.

scat man's dues were deep---here he is (per wikipedia), 2:57 in, in the amazing visualization of Ellington's Symphony in Black, two-timing Billie Holiday!

a little hard to see, perhaps, until he goes for his hat.

'White' is debatable.
I would call him a middle-eastern man.

Doesn't surprise me in the least that Spike is a fan of it. His movie Bamboozled illustrating how stereotypes persist largely because black culture is willing to sell its soul to help perpetuate it moved me to tears.

Hi, I just posted "Ahm a Niggerman" up on youtube for anyone who wants a live link. Somebody else has posted the entire movie, but if you just want to hear the track, it's here: