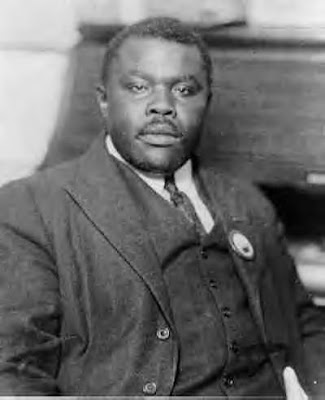 Perhaps I’m too easily excited. But I get a genuine thrill whenever I find a voice recording of a historical figure. Especially on the black side.

It’s one thing to familiarize yourself with a name on a page; it’s another to hear that person speak across the canyon of time in his or her own voice.

So I’m streaming a 3½-minute recording by Marcus Garvey from 1921. Click here to hear him explain the objectives of his Universal Negro Improvement Association.

The Jamaican-born Garvey was a pioneering black nationalist. His Harlem-based movement of the 1920s would influence the later development of the Nation of Islam, Rastafarianism, Afrocentrism and the Black Power movement. (The red, black and green – or the “black liberation flag” – originated with Garvey’s UNIA.)

Mainstream Negro leaders of the era rejected Marcus Garvey as a self-aggrandizing extremist. The NAACP’s Robert Bagnall, for example, described him as “a bully... a sheer opportunist and a demagogic charlatan.”

But as historian C. Eric Lincoln pointed out, Garvey’s radicalism attracted tens of thousands of working-class blacks, making the UNIA “the largest mass movement in the history of the American Negro” to that point.

To download a WAV file of this 1921 Garvey speech, you can find it here. This is one of only two known recordings of Marcus Garvey’s voice.
Posted by Undercover Black Man at 7:21 PM

UMB! You might remember a PBS documentary about Marcus Garvey, The American Experience—Marcus Garvey: Look for Me in the Whirlwind. . Garvey’s son, Dr. Julius W. Garvey, M.D., has some detailed critiques: “Letters to the Editor about a PBS Documentary.”

Cool, Bryan. I never did see the PBS doc.

I wish Hollywood would tell some of these stories... just for the human drama involved. But the U.S. is so damned anti-historical.