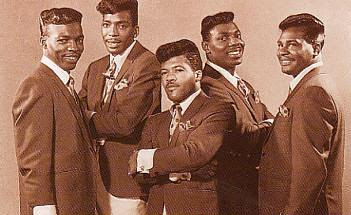 This one’s for the hardcore P-Funk heads.

From that one record, all future fame and glory for George Clinton and Parliament-Funkadelic grew. “Testify” proved that George could write and produce a hit single. It made the Parliaments an in-demand touring act. Within a couple of years, George would have album deals with two different Detroit labels.

The irony, for me as a fan, is that I never liked “Testify.” Oh, the chorus is kind of catchy, I suppose. But I never understood how this one became the breakout hit, while the Parliaments’ other pre-funk 45s (such as this one) wallowed in obscurity.

Well, “Testify” must have something going for it, because a lot of talented singers have remade it over the years. I’m streaming a bunch of those remakes on my Vox audio stash. But let’s start with the original:

The thing I enjoy most about this song is the first three words: Friends, inquisitive friends... That’s a neat lyric. The rest of it? Umm... whatever.

Johnnie Taylor got grittier with it, and took the song back to No. 4 on the R&B chart. This version also squeezed its way onto the Top 40.

Here’s how the Rolling Stones might’ve done it. This was recorded live at Electric Ladyland Studios in New York, in the middle of Ron Wood’s 1992 solo tour. Ronnie shares the lead vocals with Bernard Fowler. This version is available on Wood’s 2000 CD “Live & Eclectic.”

Willie Garcia was the lead singer of Thee Midniters, a ’60s Latin-rock band that was a big deal in Southern California. This track was produced by David Hidalgo of Los Lobos. It’s from the CD “Make Up for Lost Time.”

Stookey is the “Paul” of Peter, Paul & Mary. This version appeared on his 1980 LP “Band & Body Works.” I like how he changes up the chords or the key or whatever it is he’s doing.

Here’s a weird one. The Ace of Cups was an all-female rock band in the Bay Area that never released any records. But because these women were in the thick of the hippie scene, someone released a CD of their demo tapes and garage recordings as some sort of cultural artifact. (The 2003 CD is titled “It’s Bad for You But Buy It!”)

Most of the above tracks are available for download from iTunes and/or eMusic.
Posted by Undercover Black Man at 1:45 PM

Sounds like a Temptations record. Beauty is Only Skin Deep... Thank you Mr. Clinton putting the funk to that style of music.

I was enjoying your post about P-Funk and realized that our band, Jwonder, has something in common with P-Funk (I wish it was more than one similarity). We also have a song called "Testify" about the cult known as "ditto heads"(Rush Windbag's followers). I stumbled onto this while searching for news on Season 5 of "The Wire". Good luck with that! You can check out our tunes on myspace.com/jwondermusic and specifically "Testify" by following the links @ jwonder.com (music page link...garageband.com). Thanks!