Alan Keyes is nutty as fuck. 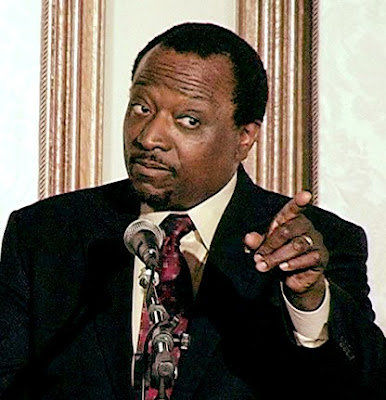 I love watching Alan Keyes with a mic in his hand. Just in terms of voice and body, his mood-swinging performance style is very entertaining.

And content-wise, Keyes is my kind of sandwich: erudition and eloquence piled high between two slices of crazy.

During the Bush years, the ultraconservative Keyes was a man barely seen or heard... even when running for elected office. Occasionally he cut through on the subject of abortion, where his position is hardline Catholic.

Now, Alan Keyes has found a message that’s bound to get him more attention: Barack Obama is “destroying America.” Obama is planning to usurp the Constitution and install himself as dictator. Seriously.

“If we’re waiting for 2010, waiting for 2012... I believe it will be too late,” Keyes told a gathering of proud Americans in Fort Wayne, Indiana, last Friday. Embedded below is a 9-minute segment of that speech.

I bet there’ll be lots of Alan Keyes rants about President Obama on YouTube in the coming years. Lots and lots. (Hat-tip: Field Negro.)

Posted by Undercover Black Man at 1:48 AM

Back in my days a reporter, I was unlucky enough to cover a Keyes ralley which included a cookout style luncheon. On the menu was fried chicken...girl this fool was sitting there eating his fried chicken with a fork and knife...WTF Now we are sitting in the middle of bumb fu*k Iowa and this fool is eating extra crispy with a knife and fork. For the etiquette record...fried chicken is classified as a finger food and should be eaten as such!

It's even nuttier that it's all the GOP has to drag out. Well, him and Michael Steele. They are in sad, sorry trouble. Yipee!

^ You know what though, GG? I don't even know if he claims "Republican" any more. He slams the GOP for being just as driven by the interests of "elites" as the Democrats.

Keyes is off the reservation.

Why is there rarely a black face in the audience when he speaks? That should tip a person off that this man is not trying to speak to the masses.

If you are a leftist half breed muslim then blacks love you, but a 100% black conservative is hated... interesting view of race loyalty and racism you all all have...