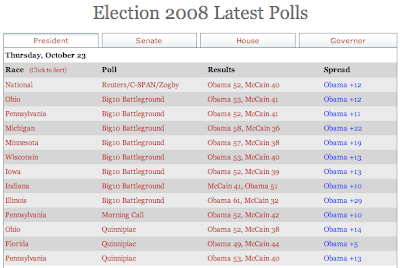 From what I’ve managed to glimpse on Fox News this week, there are some right-wing partisans who insist that Barack Obama “hasn’t closed the sale”... that the polls overestimate Obama’s strength... that the “race will tighten” in the coming days... and that McCain still has a real chance to win.

Well, just cast your peepers on the poll numbers above, courtesty of Real Clear Politics. (Click the image to see it bigger.)

The Big Ten Battleground Poll, in particular, could dominate today’s agenda among the cable-news talking heads.

Karl Rove – the man who made a president out of George W. Bush – says that in order to win, McCain must capture all of the toss-up states (North Carolina, Florida, Missouri, North Dakota and Nevada) plus Ohio and another big Obama-leaning state.

Okay. Now check those Big Ten poll numbers again. Obama’s ahead in Ohio by 12 points. Obama leads in Pennsylvania by 11.

Wow.
Posted by Undercover Black Man at 7:34 AM

Fingers crossed and all that.

He's looking good in Pennsylvania; and, if he can win there, he can win just about anywhere. By the way, Sen. Clinton has spent quite a bit of time there, speaking passionately on behalf of Obama. Wish I could say the same about ole boy Bill. But you can't have everything.

My guess is that they keep spinning that it's a close race so they can justify whatever fixes they will put in...but given the scale of fraud it will take to counterbalance the Barack landslide (it's okay to start talking in those terms) I just don't see it.

Florida is looking good. Michelle came here yesterday in Gainesville and 11,000 people showed up just to see her, which is rather astonishing. I saw her in person...love her!

Yes, Yes, Yes!!!! I live in "the bubble"; that is, the San Francisco Bay Area. So it's great to hear it's not only us latte sipping Communists who are going big time for Barack. I've been phone banking two nights a week, calling New Mexico on Skype, to identify Obama supporters that will subsequently be contacted by the Dems in NM to be sure they vote.

If you believe fivethirtyeight.com, this thing has been over for a while.

I just hope Obama's plane makes it back from Hawaii in one piece.ferwo

According to fivethirtyeight.com, a sight that basically catalogs every single poll out there and averages them together, factoring in all of their respective biases and updating daily, Obama currently has a 96.3% chance of winning. It's looking good.

Aside from the two days he needs to take off, I'm glad Obama is campaigning like someone who doesn't believe the polls. It might be a good idea for his supporters to adopt as well. If a win is taken for granted, some people may just stay home.

Plus, I don't think Kerry was doing badly in the polls four years ago.