Bill Clinton will be on “Larry King Live” tonight.

Yippee. A chance for him to do more of his passive-aggressive crab walking in “support” of his party’s nominee, Barack Obama. 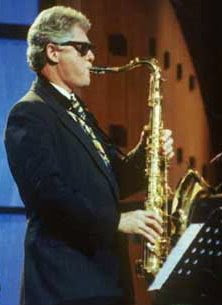 Watch him NOT say: “I will vote for Barack Obama.”

And watch him praise John McCain for his suffering and sacrifice in Vietnam.

Watch Clinton NOT say: “Obama is the best choice for America.”

And say only good things about Sarah Palin.

You want passive-aggressive? Check out when Clinton says about Obama’s success in the primaries: “[Voters] began to think, ‘Well, you know, maybe prior public service and hard effort, making hard decisions, maybe doesn’t amount to anything.’ ”

(Because, you know, otherwise they would have voted for Hillary, right?)

Way to make the case for Obama, you prat.

David, did you see this yet Bill Clinton: I won't dump on John McCain

I can't imagine anyone's urging President Clinton to "dump on" McCain. But Democrats should expect the former Democratic president to declare strongly that "Barack Obama is the best choice for America."

Instead, Clinton keeps saying, "We have to think hard about this election. People have to decide which direction they want this country to take."

Which is saying NOTHING.

FWIW, he did give a strong endorsement on The Daily Show

I'm sick of ALL Democratics, including Obama, who feel obligated to start ANY sentence involving John McCain with praise of his service to our country.

Stop talking about 40 years ago - especially when it doesn't benefit you. This is about whether he's the best candidate for president in 2009, not 1972.

Does McCain praise Barack for passing up the big corporate bucks that he was offered with that Harvard Law degree to go work as a community organizer? Just the opposite.

Bill goes the most overboard with his praise of McCain, and paired with his tepid support of Barack, he's clearly a hater. But this is a party-wide problem.

Antonio, thanks for that. You're right. Stewart had to drag it out of him, but that was the most clear, overt endorsement of Obama that Clinton has made since the convention.

This is the way people who are voting for OBAMA THE MAN versus people, like the Clintons, who are doing this for OBAMA THE DEMOCRATIC NOMINEE. I don't think you (I'm not addressing anyone in particular here) can't expect everyone to personalize this election the way you may be personalizing it. And I do think the Clintons have probably done more for the Democratic party than anyone else in the last so many years, and it may be a little petty, petulant and self-absorbed to expect THEM to campaign for Obama the way YOU want them to campaign for him.

2) It's peculiar to campaign "for" Obama by talking up McCain and Palin and only grudgingly saying that Obama should be elected. (Instead of Clinton's oft-repeated weasel words... "I think he's going to win.")

I think Barack reminds Bill how much he effed up his legacy. No matter how good the Clinton years were, the first thing anybody thinks about when you say Bill Clinton is Monica Lewinsky. Which just goes to show ya, you can put lipstick on a dick, but once he's been impeached, he's still a dick.

It's a truism of both business and politics that you never let a superstar choose his own successor.

He will invariably choose someone who won't outshine him. It isn't even necessarily a conscious choice. The ego simply will not allow that kind of competition.

Would Clinton's enthusiastic support help Obama? Maybe, a little bit. Obama will have to win this without Bill's help. Bill is probably saying to himself,

Damnit, nobody helped me! I did it on my own. Let him do it if he thinks he's so great.

^ Then the thing to do is not pretend.

The only thing that bugs me about Bill is that he has the speaking power of a howitzer and he's not using it..... if he really got down using his oratory gift and truly pushed for Obama, it would help a great deal. While I don't think he's against Obama, it's almost seems like he's just going through the motions.

If Bill really let loose and got behind Barack, it would be like having Sonny Liston having your back in a bar fight.

and UBM, keep up the blog. I read it regularly.

I've done a good amount of research on a number of Web sites about Obama's ancestory, and have been able to go back only three generations, to his grandfather. They were all Kenyan -- no Arab. Islam comes in with his grandfather.

Here's what I found about the grandfather:

"Hussein Onyango OBAMA was born about 1895 and died in 1979. Before settling down to work as a cook for missionaries in Nairobi he was a traveler. Recruited to fight for colonial power England in World War I, he visited Europe and India, and afterward lived for a time in Zanzibar, where he converted from Christianity to Islam, family members said."

Even Hillarista Taylor Marsh has had it with
Bill.