Today, I wanted to see if my prediction was coming true – that the words “danger” and “dangerous” would be hung on Barack Obama by those who oppose him.

I expected this would occur among right-wing whites. But I stumbled on a young black Hillary supporter playing this shady game. On the official Hillary Clinton website, in fact. 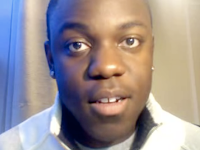 He blogs on HillaryClinton.com as “J. Allen.” He is a college student in Ohio. And last week, he titled one of his posts “Obama’s Dangerous Message.”

“Senator Clinton knows the ins and outs of the white house, and red tape,” J. Allen wrote. “She makes promises she knows are reachableable. And when she’s in the White House she’ll work for us.”

He continued: “What we as young people need to know is you can’t vote for someone on words. Obama is preaching a dangerous message of Hope and Change, While Senator Clinton is preaching a message of Change with accountability. ... I wish my peers were better critical thinkers. They would not eat up this shallow message.”

J. Allen concluded the post with these words in boldface type:

I’m glad to see this youngster involved in politics. And I certainly expect Sen. Clinton to have her share of black supporters. But I wish J. Allen would go a little deeper than echoing the Clinton campaign’s talking points of the day.

Just yesterday, J. Allen posted a YouTube video pumping up Hillary and bashing Barack. He does this in the form of a parody of that famous “Leave Britney Alone” viral vid. He calls it: “Leave Obama ALONE!”

Again, nothing but Clinton campaign talking points... including the silly-ass charge of “plagiarism.” Check it out:

Yeah, well white racists always send a Negro out to destroy a Black person. And a homo to boot?

Maybe we can keep him distracted with some man titties. Any sudden Obama supporter around who could offer up his man titties?

But I wish J. Allen would go a little deeper than echoing the Clinton campaign’s talking point of the day.


I wish they would all go deeper and talk about the issues instead of buzzwords :-) And since when is having hope and wanting positive change dangerous? If any of them are going to attack each other, at least attack each other's stances on the issues, not buzzwords. Jeez.

BTW, UBM, have you heard the latest brouhaha about Michelle Obama's quote about being proud of her country now that Obama's running for prez or somesuch? Seriously, tempest in a teapot. Clinton & McCain truly don't know how to counteract Obama's momentum if that's the kind of silly [brown word] they're going after.

Hey UBM, speaking of attacks on Obama, what do you think of the following post in the National Review's blog:

dez: The past day and a half has been wasted on three non-stories, and I blame the media.

The Michelle Obama "proud-of-my-country" remark is the most legitimate of the three... because at least that could lead to a worthwhile discussion of how even some successful black folks wrestle with their place in American society.

The other two were total wastes of time: the "plagiarism" thing, and that pro-Obama publicity seeker who got in Bill Clinton's face to talk shit.

I think Mrs. Obama should've been proud of America a long time ago... like when she got into Harvard Law. In any case, she should've been slick enough to keep that particular thought inside her head. Or save it for when you're among friends who can understand what the hell you're talking about.

She needs to smarten up. Anything she says in front of a TV camera, she's saying to Pat Buchanan... and he will analyze it through his own prism.

Abe: Thanks so much for that. I don't hang out at NRO, and am only minorly aware of Derbyshire.

But it just goes to show, white folk sure can be comical. He accuses Obama of being obsessed with his blackness... and then in the next breath he admits that when he sees Obama, he sees Al Sharpton.

I need to get out my licking stick...

Now let me ask you: What's so "dangerous" about Barack Obama? Why did you use that particular word?

Really, reaaallly wish you wouldn't give this dude the attention he obviously so desperately craves, but I know the reporter in you is always naturally curious....

^ Well, my curiosity was rewarded, IW. Youngblood sent me an email saying "dangerous" was perhaps the wrong word to use. He says he'll go in and change that.

I need to get out my licking stick...

The who in the what now?

Agreed that Michelle Obama needs to smarten up, but I'm sure she's getting plenty of help in that regard now! Still, I didn't think her remark warrants so much vitriol. Eesh.

The pundits were looking for something.

I am DONE with you!
LOL!!!!!
I am dying. What the hell is this video about? You know he dead wrong for this!hahahha.

I can't even get through it.

Did he just say--pimpin' chelsea clinton?

who is this cat?

Embarrassingly awful. This is little more than a really bad imitation of the "Leave Britney Alone" video.

A wannabe vying for his 15 seconds of fame.

It's worse than bleh; it's off-putting and inane.