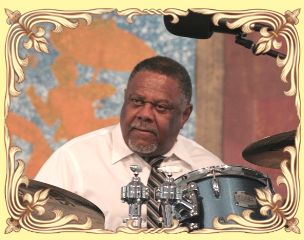 Quite sadly, I pass along news that longtime New Orleans drummer (and part-time actor) Bunchy Johnson died today, according to the Louisiana music website OffBeat.com.

Mr. Johnson will be seen acting in the premiere episode of “Treme” on April 11. (He also appears in Episode 5.)

Click here to hear a Bunchy Johnson composition – “Pass It On” – from a 2000 album by Wardell Quezergue & His Slammin’ Big Band. It’s a song about the Mardi Gras Indian culture.

oh my goodness. i'm so sad. wow. glad he was captured in the show...

Thank you very much for posting that. I have seen him play with JD many times. Thanks for the visual memory.

I saw him for many years in the 80's when he was on the Gig at the Bounty for Harvey Jesus and Fire.

Saw him most recently at the Ritz
with Jeremy. He had Great Trad Chops as well as funk and "felt really good". God Bless Bunchy!
He ALWAYS Wore a Smile!

^ And his personality really shines through in his scene in the pilot.

first day of looping, i asked him to do some shouts during a musical performance as a member of the audience, showing his appreciation. he did a great take, shouting "blow that horn, son, get it!" and when i called cut, he turned to me and said, "like that?"

"sure, so long as that's what you say during a show," was my response.

"oh, don't ask me - i just listen respectfully and applaud at the end."

"you need to start hanging out with me, baby."

You was a nise guy

He was one of my favourite people on the planet. I travelled overseas with him, played lots of gigs with him and learnt a lot from him. He played on my first record, and always played like he meant it. I was hanging out with him last week and he seemed fine, better than ever.
A real shock

^ Mr. Cleary, you honor me with your presence. Thanks for sharing your memories.

Indeed, the shocking thing is how robust Bunchy seemed. I was looking forward to him doing more acting in "Treme."