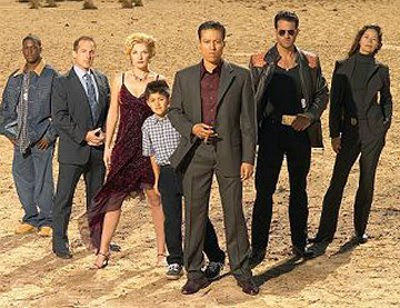 I’ve been meaning to upload more clips from “Kingpin,” the 2003 TV show I created for NBC. In particular, I’d like to illustrate how music can enhance visual storytelling.

Late in the process of writing the pilot script, I latched onto the idea of using a lot of songs... the way “Miami Vice” used to do. I figured that could be a hook, a distinguishing characteristic of the series. Something an audience might come to look forward to.

Indeed, I was delighted when the Los Angeles Times wrote an article about the use of Spanish-language tunes in “Kingpin.”

David Simon, for “The Corner” and “The Wire,” made the choice not to use much music. Any songs you heard were likely coming from some character’s radio. (Except for those season-ending montages in “The Wire.”)

Simon’s choice fit the tone of those shows – stark, dry, naturalistic, anti-cinematic. The tone of “Kingpin” was different – highly stylized, melodramatic, grandiose, with dream sequences and any other filmic device that seemed appropriate.

Rather than hire a music supervisor, I selected every song myself. (Surprised?) It was a thrill to get in the editing room and lay sound over picture and make it work.

The final 10 minutes of the “Kingpin” pilot are below. Notice how the tracks by Lila Downs and Grace Jones are put to use.

Allen Coulter, best known for his work on “The Sopranos,” directed the hell out of this. Film editor Anthony Redman cut it superbly.

Funny how a pillow doesn't do much to muffle the cannon blast from a Desert Eagle.LOL
Bet he got a chest full of feathers though.

It wasn't a silencer. It was so he wouldn't have to see his uncle's face.

Thanks for watching, though.

I don't care who you are, or what you like, but if you don't like 'Kingpin', you are dead to me. The show was 'the shit' in the awesome sense of the word. (That's how I met UBM back at the TWOP forums) and I feel *so sad* when I see Yancy Arias stuck in crappy shows like 'American Family' and 'Knight Rider' Dude deserves better. Also, Delia Alvarado deserves better than two scenes in Dexter's first season.

This show was great and deserved a much better chance than NBC gave it. The DVDs can be found for $10 and you will see why UBM wins Emmys and shit. Plus the music was cool.

My favorite character was Shay Roundtree as 'Junie' I'll never forget how he smokes those fools by using a skateboard under their SUV. Best Scene Ever. (Put the youtube clip!)

UBM, have you been checking out HBO's Capadocia? Reminds me of your stuff a bit. Its awesome too!

I have never heard of "Capadocia." I'll look into it, though.

Here is the link to the TWOP Forum discussing HBO Mexico's 'Capadocia' its also available on Demand:

I feel *so sad* when I see Yancy Arias stuck in crappy shows like 'American Family' and 'Knight Rider' Dude deserves better.

He had a nice role in the shortlived FX series "Thief," which still hasn't been put on DVD.

David, How could we tempt you to create some podcasts with episode commentary on Kingpin (Kinda like Ron Moore does with BSG episodes?) I't be cool to rewatch the series with your commentary.

Yes to the Kingpin podcasts!

I had forgotten just damnably good Kingpin was, and I say damnably because it remains a travesty its narrative was cut short.

I was JUST talking to someone about KINGPIN the other day, raving about how good it was but didnt last long...this brought back memories....i'm gonna link this at my blog...

^ Hey Scott! Thanks for that. I didn't know you were blogging.

yeh man, since i quit the journalism thing and took up teaching, i got a bit more time between books etc....so i'm back to blogging and enjoying it!...

how you been? send me your email if you can...

and thanks for the spotlight shout-out man!