David Milch, my old boss and mentor, might be the best pure writer ever to work in television. On a recent airline flight, I watched a third- season episode of “Deadwood.” The beauty of Milch’s language damn- near brought me to tears.

But Milch has hit a cold streak at HBO. I couldn’t get into his 2007 series “John from Cincinnati.” Its fusion of religious allegory and surf culture was, for me, impenetrable and joyless. And the poetry wasn’t there.

Now I hear that HBO has pulled the plug on Milch’s latest project, a New York City cop drama set in the 1970s called “Last of the Ninth.” 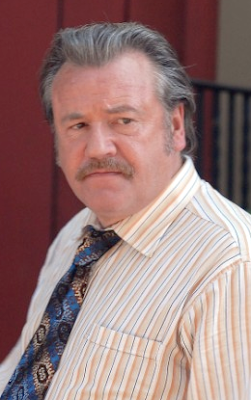 They filmed a pilot episode... with British actor Ray Winstone (pictured) as one of the leads. Evidently HBO was not digging it.

That’s a show I wanted to see. Since the ’90s, Milch has talked about creating a series based on Bill Clark’s early career in the NYPD.

Clark spent two years undercover as a white radical. He hung out with Black Panthers (including Tupac’s mama).

Oh well. At least I found a YouTube video where David Milch explains the meaning of “John from Cincinnati.” Who knew it had to do with 9/11 and our potential for “genocide”?

This is Milch speaking to a class at USC last January:

I'm stunned! Here I was thinking this was the show that would begin the return to glory for HBO. Alas, the genius is gone, replaced by marketing executives...a deep sigh.

One can only hope that a network like Showtime will swoop up the amazing Milch and let him create! I just watched the pilot of Deadwood again last night and believe that Al Swearengen showed flashes of Falstaffian brilliance. One of the great television characters of all time. An inspiration to writers everywhere.

P.S. I just read about your WGA nomination. Congratulations!!!

^ Thanks, BJ. That's for last year, though. (And we lost.) This year's nominees will be announced next month, I believe.

Actually Dave, they just announced this year's nominees today, and The Wire is nominated for best drama. Also, apparently you did win last year. Now what kind of self-respecting Hollywood citizen can't keep track of his own accolades?

^ Holy crap! I'm so embarrassed. Sorry about that, Business Johnson.

Well, at least you'll believe me when I say you broke the good news to me!

As for having won last year... now I'm really concerned about my mental health. Although I will say in my defense that, because of the writers' strike, they didn't have a full-blown awards ceremony.

(Unless, of course, I'm wrong about that too!)

Damn. So I guess there's a trophy around here somewhere in an unopened box.

Man I was looking forward to that show with high hopes. I thought American Gangster's portyal of 70s NYC narcotics would raise the interest level in Milch's new show.

If they don't pick up Simon's New Orleans show, I'm jumping off a bridge. WTF am I supposed to watch Knight Rider or something?

As an aside, UBM what the hell was
Sheryl Lee/Mrs. Cadena's bodyguard supposed to do when she want to score some drugs? The poor guy got whacked when Miguel found out. I'm not sure I've ever gotten over that. He was just a workin man!

Congrats on The Wire nom.

As for the HBO series, I bet it was too close to 'Life on Mars' another show about old-time cops. (I like it, but never have time to catch it)
Seriously, you need to get David Milch DRUNK OF HIS ASS to explain to you the whole 'John From Cincinatti' and you can explain the thing to me. I tried hard (watched the first 5 episodes) and gave up. Madder b/c I loved 'Deadwood'. Good luck on the next NOLA-based show.

Forgot to mention this because I got sidetracked by the riveting awards discussion, but I too am very bummed that HBO isn't pickup up Milch's pilot. The premise sounded very intriguing. I wondered what compelled them to not pick it up. Doesn't HBO almost always order their pilots to series?

^ But there's a new crew running series development over there, as of March '08. This wasn't their baby.

Somebody's CV is not up-to-date...

I admit I never gave "Cinn" a sideways peep....but I LOVED me some Deadwood and Swearengen (I agree Biz J). Watched season one and two intermittently...but watched Season 3 with Wire Intensity. For me, the plot was a distant third behind the Language and The Characters. I remember a character with spit on his face, giving a soliloquy in front of a mirror worthy of Shakespeare.

Damn, bro I didn't know you was hooked up like that - David Milch was your old boss and mentor? Pardon my ignorance, I just don't know Hollywood enough to know these things.

Milch is the man. I loved Deadwood, and yes his poetry was very evident in his writing.

As far as the axed HBO project again, didn't know about it, but the more I think about it, the more I'm mixed on whether or not I'd see something like that. My politics screams against wanting to see a movie about the NY Red Squads or COINTELPRO operations but then would the show have been about this cop's regret in being involved in such operations? If so, maybe I'd see it - hell, I'd see it if it was a mix of the two scenarios, especially for history sakes.
I do think however that HBO is stupid and fickle as always about what they choose to be on TV. Flight of the Conchords has no right to see the light of day anymore, yet Lucky Louie, Carnivale, and Rome is no more. Still waiting omn that deep, diverse, and smart drama staring black people...Hahahahahaha!
Fuck HBO. Again, love Milch though.

I'm shocked at this. I thought Milch was a slam dunk for this project. The only concern I had was the title. I said to myself, if this is a series about a cop named Last in the 9th precinct, that's one bad title. Guess the show wasn't much better.

So where do you think Milch goes now? F/X? Not sure his sensibility fits the networks anymore and I can't see him at a middle-of-the-road place like TNT. Maybe AMC?

Also, I'd be curious about what you think of Zucker giving Leno the 10PM slot Monday through Friday. It seems like he's given up any hopes of winning that hour and just wants something consistent. It does mean a lot of 10 o'clock dramas won't see the light of day at NBC.

And I'm a little confused about your nominations, but congrats all the same!

^ Thanks, Doug. As for Milch... good question. If he could muster the discipline to write novels, he could say: "Fuck 'em all!"

As for Leno... wow. Here is final proof that the television landscape we all grew up with is a thing of the past.

I guess it makes business sense. In the cable universe... and with people starting to consume professional programming online... the concept of a three-hour block every weeknight where you put your most expensive shows, because that's when the most people sit down to watch... that's over.

I just wish I could bear Jay Leno's comedy. I like his professionalism, his down-to-earth approach to the business, as came through in today's press conference. I just don't like his jokes.

I agree with you about Leno. Years ago, when Hollywood was just a distant hope of mine, I submitted some jokes to Leno (This was WAY before his Tonight Show gig.) He actually called me to decline the jokes, but to encourage me to keep writing. NO ONE else ever did that. I was amazed at his generosity.

Problem is...I don't find him more than intermittently funny these days. In an age of Stewart and Colbert, he seems like a throwback to an earlier age of humor.

Sadly, I am still more familiar with your writing here,than elsewhere,but do plan to correct that at some point.

That said,you deserve awards for this blog too!

Perhaps if this writing thing,turns into a long term hobby ,you can take a crack at the script for the sequel that will need to be made for this upcoming release:

Heh, Milch writing novels? He'd probably show up at the book store a day before the release with some last minute rewrites.

As for Leno, I don't like his comedy much at all, and even though he seems like a pretty nice guy, it doesn't quite match up with the stories I've heard about all the backstabbing he did to get The Tonight Show way back when.

What a shame. Milch is easily the best writer working in television. Let's hope someone backs him up one of these days.

Has the plug on LAST OF THE NINTH really been pulled? I was hoping it would be on HBO any day now.