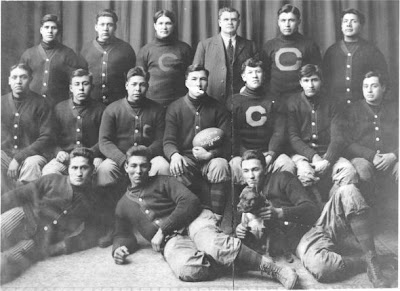 If you think the story of black people in America has too many forgotten chapters, let’s talk about the Indians. (November, after all, is American Indian Heritage Month.)

Did you know that the game of American football, as it is now played, owes a debt to Indians? Sportswriter Sally Jenkins explained this in her 2007 book “The Real All Americans.”

I was already vaguely aware of the Carlisle Indian Industrial School, which was created by the U.S. government to “civilize” the conquered Indians. But I didn’t know that the “Carlisle Indians” were a collegiate football powerhouse in the early 20th century, competing against teams such as Harvard and Yale.

The Carlisle Indians couldn’t match the white teams for physical size. So instead of the common style of play – grinding trench warfare – Carlisle focused on speed, forward passing and offensive trickery.

This strategy was developed by Carlisle’s most successful coach, a white man known as “Pop” Warner. 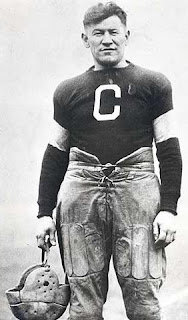 Sally Jenkins focuses on a 1912 game between Carlisle and the U.S. Army team at West Point. Army’s star offensive player was halfback Dwight D. Eisenhower... a future president of the United States.

Carlisle’s star was one of the greatest athletes of all time, Jim Thorpe, who played running back, defensive back, kicker and punter.

The racial dimension of this game against Army is fascinating. Click here to hear a minute-long excerpt from the audiobook version of “The Real All Americans.”
Posted by Undercover Black Man at 4:53 PM

Great post. The Carlisle story has always fascinated me.

John Sayles was supposed to write a feature called on it and Thorpe for Walden Media (see Variety article from 2004 here: http://tinyurl.com/66otku) but I guess it's stuck in the usual development hell.

These kinds of posts make me feel better about my surfing time.

Great post. And let me add the huddle got started at Gallaudet University so deaf student players could sign the plays before taking their positions on the field. That's what they told me on the tour of the campus a few weeks ago.