Calling a spade a spade 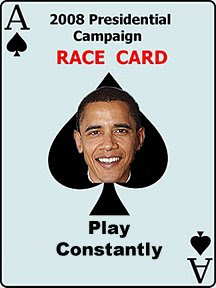 Posted by Undercover Black Man at 11:16 AM

A co-worker just brought this up to me this morning (who really "wants to like Obama"), and I haven't quite processed it yet.

Is it REALLY playing the race card when you mention that others might play it? I don't think so, but in the political arena everything is suspect.

well I am sure i have annoyed those folks enough for one day.

OneFineMess - no it is not playing the race card. It is acknowledging what we have SEEN unfold. First by the Clinton campaign then by ELECTED republicans on radio talk shows. Heck even a DEM in TN suggested he "might" have terriost ties.

The die-hards do just that, they die hard, surely and steadily, but hard! America is adjusting, changing, it's no longer just rice and peas baby, it's now Bouillabaise. This is so funny man, ...they just cannot deal.

@Phelps your facetious commentary is unnecessary

when will it be barack's turn to embarrass himself through tasteless campaign propaganda? probably long after he's won the presidency, if ever...

Ruth... you see how they do? I can't believe how personal this thing is to some of Hillary's supporters.

UBM, I have to commend you for going to these sites, I checked this one out and the level of denial over there gave me the heebie jeebies.

What exactly constitutes playing the race card? Doesn't that mean deflecting criticism by calling the attackers racist? Or seeking special treatment because of your color? When has Barack done this? Um, never.