In 2000, David Simon and I traveled to Johannesburg as guests of TV producers Hilary Blecher and Indra de Lanerolle. It was a wonderful two weeks. Our hosts treated us royally. And we met bunches of people from throughout the South African television industry – white, black, coloured and Asian.

They wanted to hear from Simon in particular because “Homicide: Life on the Street” is beloved in South Africa. Hilary and Indra were developing a police drama that aspired to a “Homicide”-like level of quality.

Simon and I spent a week sitting in on writers’ meetings for this show, “Zero Tolerance.” I was impressed with what they wanted to do. Even more so when I learned about the history of South African TV.

Basically, South Africa didn’t even have television until the mid 1970s. Why? Because the small white population was so scattered geographically, it didn’t make sense to construct a nationwide broadcasting infrastructure... except for radio. Radio was the place for drama and comedy in South Africa.

Once the state-owned South African Broadcasting Corporation (SABC) got into the TV business, the government’s apartheid policies dictated what was seen. You wouldn’t see, for instance, black people and white people on screen at the same time.

Nowadays, the SABC is a tool of the governing African National Congress. 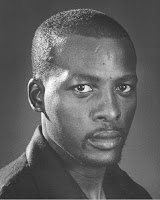 “Zero Tolerance” was produced and broadcast a few years after Simon and I visited. I have seen four episodes from Season One. I dig it to death. The writing, the acting, the production values... all top-notch. “Zero Tolerance” is a showpiece of the South African entertainment industry.

I’ve uploaded a 4-minute video clip to YouTube so you can see for yourself. In just this little bit, you can see that actor Tony Kgoroge (pictured) is the real deal. (He has since appeared in international films such as “Hotel Rwanda” and “Blood Diamond.”)

Ben Kruger is cool also... the Dennis Franz of the Afrikaners. I like how “Zero Tolerance” at least acknowledges the political tensions of black rule and white subordination.

This episode also deals frankly with a type of crime that might embarrass the black majority – so-called “muti killings,” in which humans are murdered and dismembered so their body parts can be used to make magic potions.

Check out this little window into a different society:

Did you meet with Themba Sibeko?

^ No I didn't, Michael. More so lower level types... programmers, writers, etc. Though I did meet the great actor John Kani.

You been to South Africa, doing the music thing?

Wow UBM! This is really intriguing. Not available on Netflix so I'm guessing there are no DVDs yet?

Very, very cool. Thanks for this.

Vid wasn't working - I'll check back later and try again - anyway, thanks for sharing the story about SA's television history.

Just recently read a cool article about David Simon & The Wire in The Atlantic too.

Sorry, SOSS... I've been searching all over, and can't find these DVDs for sale.

I hope that'll change. They did three seasons of this show, and I wanna watch them all.

You should read Rian Malan's book, My Traitor's Heart. He was a descendent of the architect of apartheid who was a journalist who covered crime. He eventually left SA for political reasons, but the book is about the murders of 6 different people (3 white, 3 black, I think - I read it long ago). I can't even explain how good this book is. He basically examines his "whiteness" in view of what these crimes mean about apartheid generally. I can't do this book justice, but I do recommend it. The Wire and Homicide remind me of this book.

Homicide was my shit so I'm gonna really dig this show.

As the airdate for the last episode of The Wire approaches, Marc Steiner and the Center for Emerging Media are doing a new series of interviews on The Wire. There's going to be a new one added to their site every day this week. The first interview, with Ed Burns, is already up! The site is www.marcsteinerblog.wordpress.com
To go right to the Ed Burns interview, go here: www.marcsteinerblog.wordpress.com/2008/03/03/3308-the-wire-podcasts-ed-burns