Adventures of the... EXCEPTIONAL 4!

Part One: WITH EXTREME PREJUDICE
Life is nothing close to normal ever since I joined the League of Exceptional Negroes of America.

Any time of day or night, whenever I hear that special ringtone, I have to haul ass to Headquarters, regardless of whatever else I’m doing.

Didn’t take me long to understand why Chapp-El up and quit. The pressure’s a bitch. But even on the roughest days, I’m grateful that Chapp-El bowed out.

Sure, L.E.N.A. could’ve used that $50 million. But nobody wanted to see him end up like MJ. Lord knows we all run that risk.

Besides, Chapp-El’s departure opened up a spot for me in the elite operations unit... the Exceptional 4! And there is no higher calling for a race man.

The sliding doors hummed open, and the bare whiteness of the White Room made my eyes hurt. No furniture here except four white barstools... and an 80-inch plasma TV on the wall.

My body wanted to be back in bed. 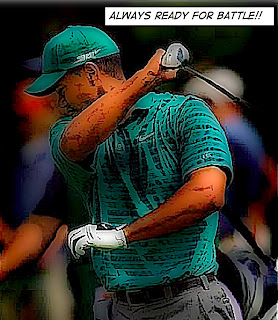 I was the second to arrive. Tiger-Man was in a corner, bouncing a golf ball off the head of his sand wedge... a habit that was annoying as fuck on the best of days.

“You know what it’s about?” I asked him, pulling a loose Nat Sherman cigarette out of my shirt pocket.

“No idea,” said Tiger-Man, steady bouncing that ball in the air for no damn reason.

“Three in the fuckin’ morning,” I sighed, lighting up. I envied Tiger-Man for his Zen-like serenity.

Then a voice came from behind me: “You need to take better care of your body, UBM.” It was the Fresh Prince, strutting through the sliding doors like it was lunchtime. “I mean, damn... look at yourself.”

“What you got to be stressed about?” said the Fresh Prince. “You probably caught a cab to get here!” He chuckled.

I know some dudes talk just to be talking. But my brain needed warming up, so I answered back: “Yeah, cabs don’t pass me by. That’s why I work deep behind enemy lines. I walk amongst ’em, feel me? I wear the mask.”

As I took a quick hit of nicotine, Fresh Prince pantomimed playing a violin. Like I wanted him to cry me a river. 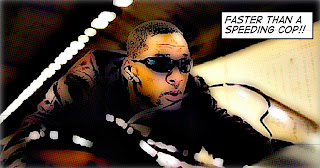 “Okay, let’s trade places,” I said. “You go undercover, let me be the movie star, signing autographs and shit.”

“I’m talkin’ about your health, brother,” the Fresh Prince said. “All I’m sayin’.”

I tilted my head at Tiger-Man. “What, so I can marry a blonde bitch?”

“Ohhh shit!” The Fresh Prince rasied a hand to his mouth and buckled his knees for comic effect. As I took a long drag of smoke, Tiger-Man caught the golf ball with his left hand and approached me calmly. Fresh Prince kept on laughing and woofing.

As I blew smoke off to the side, Tiger-Man gently tapped my chest with his club head. “I didn’t hear that last thing you said. Can you repeat it?”

The sliding doors hummed open. In walked Baraka. Still in an instigating mood, the Fresh Prince said to him: “Yo, Baraka. Where’s the pillow?”

“The one you been sittin’ on ever since Hillary tapped that ass?”

The Fresh Prince let out a cackling laugh, and I started laughing too. Even Tiger-Man cracked a smile. Baraka did not.

“I got something for Miss Ann, don’t you worry,” he said.

Then a thought hit me, and I opened up my arms. “Hey... is this about you, Baraka? You the reason we’re here at three in the morning?”

Tiger-Man moved towards Baraka, waving his club the way a teacher would a yardstick. “You don’t go into battle against Whitey,” he said, “until you’re prepared in your mind to bury every last one of the pale-eyed sons-of-bitches.”

“I am prepared,” Baraka said, self-assured as always. “I was born prepared.”

“Yeah, right,” the Fresh Prince said. “Prepared for another ass-whuppin’ or two. That’s what you better be prepared for!”

I dropped my cigarette, stamped it out. “Dammit, didn’t I say it? Didn’t I tell her? I knew it was too early for that operation.”

“We should’ve waited till 2012. Didn’t I say so?” I was stabbing the air with my finger to get my point across.

“Well, you fellas don’t call the shots around here, do you?” Baraka sat on a barstool, easy as you please. 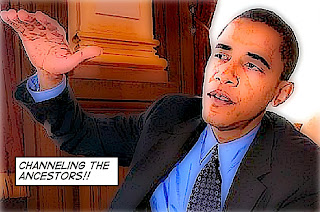 Pretty soon, the four of us were talking over each other, rehashing old arguments... until a strong female voice cut through our noise with “Negroes, please!” It boomed out of the surround-sound speakers like the voice of Moses.

In unison, our four heads jerked toward the plasma-screen TV. And there was our leader: “O.”

“This is not about Baraka,” she said. “And I don’t want to hear any pissing and moaning about that operation. I just need you to be ready when called upon. Understood?”

The Fresh Prince said, “You right, you right.” I nodded my head also.

“So what do you need us to do?” asked Tiger-Man.

“This is about Wesley Snipes. Whitey’s got him up against a wall,” said “O.”

“What does that have to do with us?” Baraka asked.

“Yeah,” said the Fresh Prince. “Wesley’s not an Exceptional Negro. Not even close. His movies go straight-to-video.”

“He may not be Exceptional, but he has information the crackers can use to hurt us,” our leader said. “Wesley must be silenced. By any means necessary.”

“What kind of information?” asked Baraka.

“That’s on a need-to-know basis,” she replied. “You have to act fast. His tax trial starts tomorrow. Wesley’s looking at 16 years in federal prison.” 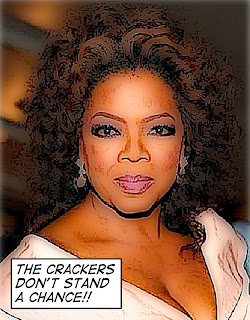 I should’ve kept my mouth shut, but I had to ask: “Information about Denz-El?”

“O” made a sound of exasperation. “UBM, what part of ‘need-to-know’ don’t you understand?”

“I’m just saying, if it’s Denz-El’s problem, he should be the one to handle it,” I said.

“I want to make this absolutely clear,” she said in a biting voice. “If Wesley Snipes tells the white boys what he knows... it could spell the end of the League of Exceptional Negroes of America.”

Tiger-Man, Baraka, the Fresh Prince and I exchanged looks of concern. We knew what had to be done. ...
Posted by Undercover Black Man at 3:29 PM

When is the Fresh Prince gonna say "Aw, HELL no!"

Lol! I likes, I likes. Waiting for the next installment.

When does this come out in graphic novel format!? :-D

Wasn't this originally published by Milestone?

“Yeah,” said the Fresh Prince. “Wesley’s not an Exceptional Negro. Not even close. His movies go straight-to-video.”

“I got something for Miss Ann, don’t you worry,” he said.

I will put this on TV.

You know what? Youre a great writer!

You got the gift.

As a former comic book collector I really like this. An interesting concept you came up with here. I can't wait to read the next installments.

Haha, can't wait for the next "issue".