Something kinda disturbing from Laz D

A white rapper with Down syndrome.

Sounds like a Fred Armisen sketch that Lorne Michaels would never put on the air, but it becomes a backstage legend at “Saturday Night Live.”

But no, it’s real. It’s realer than “Real Deal” Holyfield. 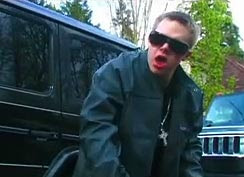 The rapper’s name is Cameron Lasley, a.k.a. “Laz D.” He is 25 years old and mentally retarded due to Down syndrome. And he’s got something to say about “the street.”

Unfortunately, I can’t quite understand what he’s saying about the street. Because of the Down syndrome.

On one hand, this certainly qualifies as a triumph of the human spirit. Laz loves hip-hop music, there’s no doubt about that. And he is bravely following his lyric-spittin’ dreams in spite of the mocking laughter of a hostile world.

On the other hand, well... mocking laughter is pretty hard to resist in this case. You’ll see what I'm talking about.

Then you feel guilty for laughing. And so to mitigate that guilt, you condemn the legion of snarky assholes on the Web who have poked merciless fun at Laz D on various comment boards.

(Cut the kid some slack, why don’t you?)

“I wish he used the N word more or at least call himself a retard multiple times,” wrote another one.

(He’s got more courage than you, douchebag!)

And some guy wrote: “If I was a rapper with Down syndrome I’d call myself Chrommy 21.”

Oh please. There's not a thing shameful about shameful humor. I don't even have to watch the clip to know it's funny. Sometimes the premise is enough.

You're a cold, hard man, Andrew. I bet you give Rubik's Cubes to blind kids.

I think that comment was supposed to attack Eminem.

“If I was a rapper with Down syndrome I’d call myself Chrommy 21.”

Dave, this blog is the shit. Keep up the mad weirdness of Life.

Should've previewed the last post. "Cubes" is what I meant to print. Maybe Laz D's spirit took over my fingers.

I'd berate my interns for that kinda slop.

Honestly I'd say the new R.Kelly provokes more embarrassment and merits more mockery and that Laz D is about as coherent as half the rappers from Houston. The hard part in watching this is just the dorky, clueless white kid aspect. Unfortunately it looks like his new found fame is beginning to corrupt him-- there's other videos with production values and rent-girls... So maybe he's just retarded enough for the mainstream now.

Thanks for the vibe, DeAngelo.

Unless I am mistaken I believe that Karl Rove has to win the Dorky Hip Hop Award. He ought to appear in Laz D's upcoming video so as to make ol' Laz look downright slick.

The more I think about that one, the more I like it.

I laughed before getting to the second paragraph of reading.