I want to take a little break from giant Negroes to tell you about a “whistling coon.” 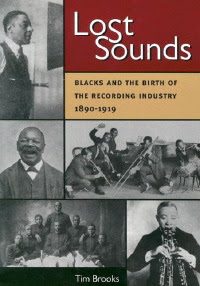 Johnson had been a Manhattan street performer, Brooks writes, “a poor black man who whistled and sang jaunty tunes for the coins of passersby,” and he was “a well-known character in the city’s tenement-filled lower West Side.”

I am streaming Johnson’s rendition of a popular minstrel song, “The Whistling Coon,” on my Vox audio stash. This one was reportedly cut in 1891. Click here to hear it. You can download a copy in various formats from Internet Archive.

Intriguingly, Tim Brooks begins his book with a scene in the New York Criminal Court on December 20, 1899:

TIM BROOKS: The New York City courtroom is packed and buzzing with anticipation. Finally the judge gavels for order. He nods at the bailiff who begins to read, “the State of New York versus George W. Johnson... the charge, murder in the first...”

Suddenly the room erupts, and the judge gavels repeatedly. “Order, order! Order, or I’ll clear this courtroom.” He glares down at the prosecutor, a small inept-looking man, who looks back and shrugs as if to say, “Don’t ask me what’s going on.”

The judge has never seen such a turnout for a case like this. There must be one hundred people in the noisy courtroom. Rows of black men and women from the defendant’s neighborhood pack the seats on one side of the aisle, there to lend support and show how beloved he is in their marginal world.

Opposite them, incredibly, are rows of white people, prosperous-looking citizens, businessmen in their suits and vests, even a corporate attorney who has worked to ensure that this “itinerant Negro” gets the best defense the white legal system can provide. At the defense table sit two of the leading criminal lawyers in the city, both white.

Seated between them is the defendant, a burly black man with a very dark complexion and in his early fifties, dressed for the occasion but obviously not wealthy. His well-worn face bespeaks a long life of hardship, but his expression is serene.

He has been charged with beating his mulatto mistress to death while drunk. Judge Newburger has seen cases like this many times before. The city’s teeming slums are filled with violence, committed by poor blacks and immigrants whom decent citizens have never heard of and certainly don’t care about. This ought to be an open-and-shut case.

Rumors abound. White people have collected a substantial defense fund for him; the son of the slave master who owned him fifty years ago has come from hundreds of miles away to speak on his behalf; the white company he works for has volunteered to defend him against this murder charge.

Sensing a juicy story, reporters from all the major city newspapers crowd the back of the courtroom. The judge, a politically ambitious man, knows he had better be careful.

While he continues to gavel forcefully, the judge leans over to the court clerk and whispers, “Who is he, anyway?”...

George W. Johnson began making records in 1890, just a few months after commercial recording began and thirty years before blacks became prominent in the medium. He was for years the only African American whose recordings achieved wide circulation.

Those recordings were extremely popular, and in fact, his “Laughing Song” was probably the best-selling record of the 1890s. Although the infant phonograph industry and its customers were nearly all white, and prejudice was strong in those days, his race was not concealed. His picture was often published in catalogs, and he was promoted as a “star” of the new medium.

From all evidence he was extremely well liked within the industry, and was paid and treated as well as any white artist of the time. Yet, perhaps because of the almost total lack of information about him, Johnson is today virtually unknown to writers on black history.

[From “Lost Sounds: Blacks and the Birth of the Recording Industry, 1890-1919.” Copyright 2004 by Tim Brooks. Used with permission of the University of Illinois Press.]

A few weeks ago I stumbled upon this gem: All Coons Look Alike to Me. (Listen out for the N-bomb.) I was like, WTF!?

The song was written by Ernest Hogan, a black comedian, but here it is sung by Arthur Collins, a white comic. And when Jack Johnson fought white champ Jim Jeffries in 1910, the band played it. (Hey! Rocky had his own theme music, right?)

btw, here's another "Giant Negro" reference for ya. Jack Johnson's nickname was {drumroll} the "Galveston Giant."

I absolutely love your blog; it is saved in my favorites :-)

Jena 6. I just read about those guys. Dave google that story and do a piece on it - please. It's outrageous. I just wrote a commentary for my column in The Write-Up!

Dude! What happened in the case? Was he aquitted? I'm dying to know!

^ Oh, right... Although you could probably guess, considering the high-powered white lawyers hired for his defense.

George W. Johnson was acquitted. He came out of the courthouse whistling, and blacks and whites gathered to shake his hand, and women gathered to kiss him.

A lawyer for the Columbia Phonograph Co. was quoted in the New York Sun after the trial as saying:

"Johnson is what you would call a good coon. He is too good natured to ever have killed that woman. ... I am glad that I was the first to shake hands with him after he was discharged. He can earn $35 to $100 a week singing and whistling."