The bizarre exploits of “giant negroes” (as documented in the New York Times, the Washington Post and other major newspapers in the early 20th Century) are so numerous – and so intriguing in their details – I plan to stretch this thing out for a while.

I’ll relate two such tales today, saving many more for later. Y’all gon’ be like, “Tell us another one, Uncle Dave!” Because these stories never get tired.

Take the case of Edwin Dennis, a.k.a. “Stonewall Jackson – the Black Phantom.” The New York Times wrote about him on June 8, 1942, under the headline “ ‘Black Phantom’ Caught in Bronx.”

“The capture early yesterday morning of a giant Negro” – (the Times was using the capital N by this point) – “grotesquely costumed as the ‘Black Phantom,’ ended a wave of terrorism in the wooded sections of Bronx Park where there has been a series of holdups in the past two weeks.”

Initially, the Times put this robber’s height at 6-foot-4. A follow-up story downsized him to 6-foot-2.

Anyway, here’s how this “giant” was caught: Three police detectives were driving through Bronx Park around 1 a.m. when they got flagged down by a Jewish couple. The couple said they’d just been robbed of $9 by “an apparition that ‘was enough to frighten Hitler himself.’ ”

The couple got in the car with the detectives, and the search was on.

Soon, they came upon another robbery in progress... another couple, hands in the air. Their assailant was dressed in black, wearing a mask and a black metal helmet... plus “3-inch wooden blocks attached to his shoes.” (To “add to his stature,” the Times later reported).

This was 22-year-old Edwin Dennis.

Armed with a club and a homemade pipe gun, Dennis dropped to the ground as the detectives approached him. He shouted, “I always said they’d never take me alive,” and then shot himself in the chest.

But the .22 caliber bullet didn’t penetrate his costume.

The policemen “leaped upon him,” arrested him, and shipped him off to Bellevue Hospital for observation.

(In fact, Edwin Dennis was still in Bellevue when the cops brought robbery victims to police headquarters to identify him; detectives showed them a rag-stuffed dummy wearing Dennis’s mask and helmet.)

Within days, young Mr. Dennis was indicted for first-degree robbery. 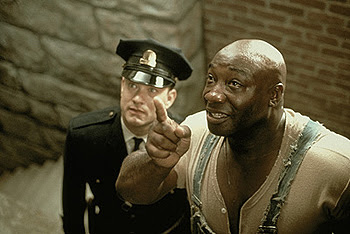 Now, it’s worth pointing out that not all giant Negroes who made the papers were evil-doers. The phrase “giant negro” was also applied to certain athletes. Including one college football hero by the name of Paul Robeson!

In 1919, at the end of Robeson’s collegiate career – which also included varsity letters in basketball, baseball and track and field – the New York Times ran this headline: “Rutgers Loses Robeson; Giant Negro Was One of Greatest College Stars.”

Then there were the boxers. Such as (of course) Jack Johnson (“...the giant negro bowed and scraped to the mention of his name”).

When it came to athletics, some white men were also described in the New York Times as giants. Such as wrestler Paul Sampson (“the German giant”), boxer Harry Persson (“Swedish giant”), wrestler Leon Pinetzki (“the Polish giant”), and, going back to the 1800s, boxer Ned O’Baldwin (“the Irish giant”).

But in the realm of crime, all the giants seemed to be Negro.

Which brings us to Raymond Dodds, subject of this Chicago Tribune headline on January 23, 1916: “Wife of Hotel Proprietor and a Giant Negro Sought; Black Said to Have Forced San Diego Woman to Flee With Him Under Death Threat.”

This one is unique for a couple of reasons. First, the article specifies that Raymond Dodds was, in actuality, “a giant mulatto.” (Yo, represent!)

Second, there’s much more to this story than meets the eye. As if you didn’t have an inkling. I decided to search the Los Angeles Times archives for more detailed information.

Sure enough, the L.A. Times covered this unfolding drama day by day over the course of a week. 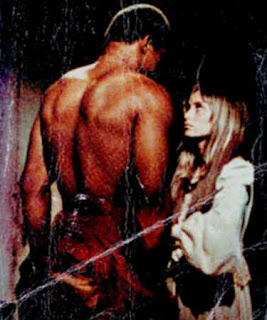 The Times in its first article (01/23/16) reported that Van Lee Hood, “a well-known San Diego business man,” had just arrived in L.A. “in hot pursuit of his beautiful young wife and a negro, who he believes is holding her a captive.”

Several months earlier, Mr. Hood had fired Raymond Dodds from his job as a porter in Hood’s La Vista Hotel. (On suspicion of theft, said Hood.)

The L.A. Times described Dodds as “a giant negro and former prize fighter.” And it reported this:

“According to Mr. Hood the negro is a ‘lone wolf,’ associating only with white people, and had been infatuated with his wife for many months. He declared that the negro had threatened to kill Mrs. Hood, her parents and himself if she ever disclosed that he desired to woo her.”

After his wife’s disappearance, Van Lee Hood received this telegram from her: “I have taken the only course to keep my family from death and destruction. ... Will write again soon. ... Brace up. You cannot suffer any more than I have been and am. Tell the people we had trouble and I left. Goodby. Viola.”

Mr. Hood told the L.A. Times: “I know that the negro has her in his power, and that she is in fear of her life.”

Yet, in that very first article, the newspaper reported some “perplexing” details of this “remarkable mystery.” A woman matching Viola Hood’s description was seen two nights earlier in a San Diego bus terminal, buying a ticket for Los Angeles. Five minutes later, a “gigantic mulatto” appeared and also purchased a ticket.

When the L.A.-bound passengers had to switch busses because of a road problem, “the negro carried the woman’s two suit cases, acting, other passengers said, as though he were a servant.”

In the next day’s paper, the headline now described Raymond Dodds as an “Alleged Negro Abductor.” (Interestingly, he was never again referred to as a “giant.”) 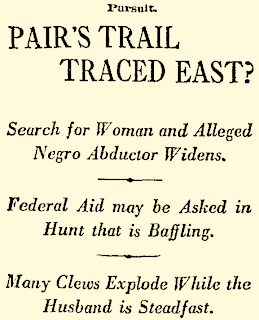 Police believed the missing two were on their way to Salt Lake City by rail. A train employee told detectives:

“A negro and a white woman, answering the description of Mrs. Hood and Dodds... insisted on riding all night in the chair car. I noticed them particularly and during the ride my attention was called to the couple by the other passengers, who asked that they be ejected from the car.

“They did nothing that called for such action on my part. They were extremely affectionate but as they were well-behaved otherwise, I did not even caution them. They left the train at Salt Lake and were hissed by the other passengers.”

When told this story, according to the L.A. Times, Van Lee Hood “shook his head” and said it couldn’t have been his wife. Because she intensely disliked colored people.

The following day came this headline: “Negro and Mrs. Hood Surrender in Salt Lake. Woman Tells the Police She Left San Diego Voluntarily and Paid All Expenses of the Trip...”

Raymond Dodds, aware of the heavy news coverage, turned himself in to police, explaining that Viola Hood “had urged him at intervals for a year to run away with her....”

A little later, Mrs. Hood also turned herself in. She confirmed Dodds’ story, adding that their plan was to get married in Utah under assumed names, then go to Chicago to live.

Informed of this, Van Lee Hood still refused to believe it. He issued the following statement:

“I positively will not condone any willful, guilty overt act on the part of my wife, but I will yet stake my life on her virtue, honor and innocence. And I will spend all the remainder of my life and all the means I have and that I can obtain in proving up her character and honor and in punishing her assailant. ...”

Viola Hood’s parents were of a similar frame of mind. Her mother said: “Despite reports from Salt Lake City attributed to my daughter to the effect that she loves this negro, I believe she has been misquoted.” And her father proclaimed: “I will leave nothing undone to bring Dodds to justice.”

But prosecutors had no intention of charging Raymond Dodds with any crime.

Believe it or not, the story doesn’t end there. Once Van Lee Hood got his wife back to California, she sang yet a different tune, saying that Dodds was merely her “hired servant” – not her lover – and that she’d run away from her husband because she was “wildly jealous” over the attention he received from other women.

On January 29, 1916, Mrs. Hood declared in a sworn statement: “I... do of my own free will and accord hereby solemnly declare and affirm to my husband, my father and my mother, and the world at large, that I have never had any immoral or illicit conduct with any man, that I have led a straight, clean and moral life.”

Yeah, right. Tell it to the giant Negro. 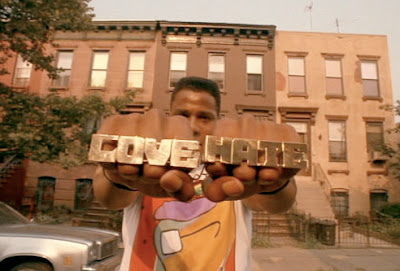 wow. after the dodds story i'm pretty much speechless. which never happens. the giant negro series is fascinating, ubm. good work. and for the record, the "giant negro" in green mile made me so annoyed, i just saw the movie about six months ago on cable. no comment.

Great story. It's really informative, especially with the historical references.
Unfortunately, this still goes on within the media. Whenever a minority is caught in a crime they're "a wolf pack", while when they're white, they're "suspects".
Hopefully, we'll get to the point where all people are described in the same manner.

Why give it away for free though? Would it discomfort the good liberals who read the Style section of the Post?

The fact that dude was actually a mulatto made him all the more threatening. A mulatto, by the standards of the time, was a mixture of human (white) and animal (black), like a werewolf.

Birth of a Nation was really a monster movie.

Thanks, you guys. Justjudith, it was the "magic Negro" thing that bugged me when "Green Mile" first came out...

To be fair, Lefty, the "wolf pack" thing was never a widespread designation, as far as I could see. Not as widespread as "giant negro" seems to have been...

Odocoileus, why not give it away for free? That's what I love about this new medium... We don't need to rely on huge corporations to provide us information about the world.

A brother needs to get paid, yo. PAID! (Ain't nothing going on but the rent.)

I agree, the free sharing of ideas benefits everyone.

Very amusing story, but also depressing, because the thought crossed my mind that if this happened today, the odds that Mr. Dodds would be arrested are a bit higher.