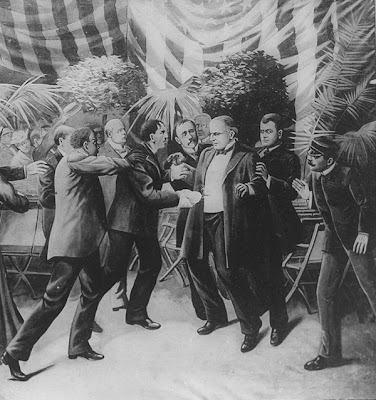 I made a mistake in my first “giant negroes” post last week. I wrote that a giant Negro had saved the life of a U.S. president.

What actually happened, way back in 1901, was this: James Benjamin Parker – who reportedly stood 6-foot-6 – helped subdue the gunman who shot President McKinley twice at very close range. McKinley died of his wounds a week later.

The assassin was a Polish-American anarchist named Leon Czolgosz. The shooting occurred on September 6, 1901, at the Pan-American Exposition in Buffalo, N.Y.

On September 8, the New York Times published a brief “Story of an Eyewitness.” The man, identified only as a “prominent Exposition official,” said this:

“Quick as was Czolgosz he was not quick enough to fire a third shot. He was seized by a Secret Service man, who stood directly opposite the President, and hurled to the floor. A huge negro leaped upon him as he fell and they rolled over the floor. ...”

The Atlanta Constitution on September 8 made a much bigger deal over Jim Parker’s involvement. The headline read: “Assassin Was Caught By an Atlanta Man. Jim Parker, Negro of This City, Overpowers Anarchist Czolgosz.”

“If I had not grabbed that crazy loon he would have shot again,” Parker said. “I got a strangle hold on his neck that I learned down south.”

Parker had been standing in line, like many others, to shake William McKinley’s hand.

“Just think,” he said, “old father Abe freed me, and now I saved his successor from death, provided that bullet that he fired into the president don’t kill him.”

The Atlanta paper described Parker as “a man of probably 6 feet 3 or 4 inches in stature and... Herculean physique. It is little wonder the president’s assailant was prevented from further violence once the hands of the Atlanta giant were placed upon him.”

Within weeks, however, the Atlanta Constitution was singing a different song.

During the assassin’s hasty trial, a Secret Service agent testified that “I never saw no colored man in the whole fracas.” (Jim Parker was not called to testify.) This led an editorial writer to wonder whether everyone had been “slickly duped” by the smooth-talking colored man “Jim.”

In December of 1901, Mr. Parker received what the Washington Post called “the first official recognition of his brave act” – in the form of a J-O-B.

As the Post reported on December 22: “James B. Parker, the giant negro whose trusty right hand felled the assassin Czolgosz in Buffalo... has been summoned to take a government position.” This was at the behest of presidential assistant George B. Cortelyou and two U.S. senators, among others.

Of course, the only civil-service job black folks could get 100 years ago was as “messengers.” So Mr. Parker became a messenger in Senate.

“My only regret,” Parker said on his way to D.C., “is that when I knocked Czolgosz down I did not bite off an ear or disfigure him in such a way as to furnish facial evidence that could not be questioned.”

According to the Post, Parker had been offered “large sums” to appear at museums or with traveling theatrical companies. But the big man refused.

“It would be against my sense of decency,” Parker is quoted as saying. “There are in this country ten millions of colored citizens, who regard it as an honor that one of their race should be the first to spring to the aid of the stricken President. Many of them have written me, telling me they were proud of me, and I could not after that turn myself into a dime museum freak.”

Way to go, Giant Negro!
Posted by Undercover Black Man at 10:38 AM

“My only regret,” Parker said, “is that when I knocked Czolgosz down I did not bite off an ear or disfigure him in such a way as to furnish facial evidence that could not be questioned.”

Yeah, too bad he didn't go Mike Tyson on that ass.

Curious. Were there reports of giant negresses?

Jena6, you must be psychic! The phrase “giant negress” doesn’t appear in the New York Times database... but there is the story of Annie Gross.

Mrs. Gross was described as “an American negress of gigantic size – 6 feet 2 inches in height and proportionately muscular.”

Her estranged husband Jake (the aforementioned “ragtime dancer”) was shacked up with Jessie McIntyre, a “pretty young actress.”

Early one Sunday morning, after a late-night party, young Miss McIntyre was surprised to see Annie Gross spring out of her bedroom, holding a revolver. The white girl was shot on the staircase, one bullet striking her in the head, killing her instantly.

When Jake Gross went to check out the commotion, Annie pointed the gun at him and pulled the trigger. But she was out of bullets.

“The negress then fled into the street shrieking, and was captured after a short chase,” the Times reported.

In case you’re curious, the New York Times referred to black women as “Negresses” in news articles up through the 1940s. (Same with “Jewess.”)

"Giant Negro" would be a great name for a blog!

This has been great reading. The Giant Negro superhero would be as fascinating a character as his arch-rival the Crazed Giant Negro.

The poster who made the reference to Black Goliath inspired me to go to a comic book store. Because when I was growing up, Black Goliath, Black Panther, and Luke Cage aka Power Man Hero for Hire were the only bruhs in the comic books. They might not've been first-line Marvel characters, but they had impact. Hell, the Beast of the X-Men went from a costume-clad gymnast to a dark blue bruh with a funky hair-do that LA bruhs would play in the late 80s.

Then I re-read an essay by Eldridge Cleaver from Soul On Ice about how the heavyweight champion was the ultimate "man." Before then, I had been a guy who could name all the presidents and the heavyweight champs. I was fascinated by Jack Johnson because of the context. He might've inspired the Mandingo series.

Speaking of Mandingo, I recalled my teenaged readings of Mandingo, Drum, and The Mustee. Ken Norton towering over Susan George was a classic photo, even though the memory the burns my mind is the sista concubine getting spanked by a leather belt by her white "master" before he had "sex" with her. Reading the book, Mandingo, you grab the envy/fascination that ends tragically. In the case of Mede, his master boiled him to death.

And then it came together. The Giant Negro symbolizes the fear and envy all at once. Recognizing they were flip sides of the same coin, as Bootsy said when James Brown was teaching him about the One, I thought to myself, "I .. think ... I ... understand."

The Giant Negro string is a baad piece of exposure. Don't stop 'til you get enough.

Shit, I need to be careful because my five foot nine ass might become a "Giant Negro" in this revisionist era of fear-mongering.

And Dave, you're a couple inches taller than me, at least. That good research you're doing might convert you to a Giant Negro. In LA, too? Drive the speed limit.

DeAnge: At best, I might rate as a "burly mulatto"... in L.A. more likely eyeballed as a "portly Latino."

I know at least three bona fide giant Negroes, and you know dark skin has got to hype the fear factor tenfold. Those guys are the ones I hope never have an encounter of any kind with the police.

Mrs. Gross was described as “an American negress of gigantic size – 6 feet 2 inches in height and proportionately muscular.”

Was that Ms. Tamara Dobson aka "Cleopatra Jones?" (R.I.P.) btw, is that Cleopatra in Invisible Woman's avatar?

Parker said. “I got a strangle hold on his neck that I learned down south.”

Makes me think he survived a police encounter, but I could be reading too much into that.

Of course, the only civil-service job black folks could get 100 years ago was as “messengers.” So Mr. Parker became a messenger in Senate.

That was probably his cover. By night he would do secret Giant Negro deeds for the government. Perhaps the earliest known use of the term ¨Black Ops.¨

Following one of the links, it turns out the man was actually a constable (that's a cop, right?), once upon a time.

According to the Atlanta Constitution, he was well known in Savannah and at one time was a Constable for a Negro magistrate. The article also said he had the reputation of never returning an unserved warrant. The citizens of the East Side of Savannah also knew that he was man of few words and a command to submit to arrest was always quietly obeyed.
http://www.math.buffalo.edu/~sww/0history/parker_big.ben.html#early%20years

That man was no mere messenger.

James Benjamin Parker, being the learned man that he was, probably was aware that President McKinley had taken a step forward in 1898 when he visited Tuskegee Institute during a time of pure racial hatred and segregation in this country. Maybe the act influenced Parker's decision to stand in line to meet President Mckinley in Buffalo. Whatever the reason, history had a place for the two men. I have in my collect a newspaper of September 14, 1901 that had its front page devoted to President Mckinley, Mrs. Mckinley, Theodore Roosevelt, and would you believe it, a large-size color illustration of the scene at which Parker punched out "Czolgosz the Anarchist." In this scene, the secret service agents are reacting to, not leading, the capture. Isn't it interesting how the truth always has a way of coming to light when you know where to search for it?