Sing Along with Milch 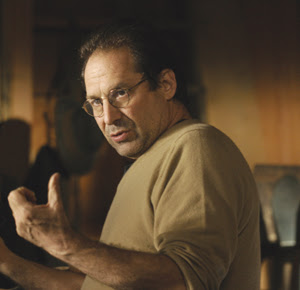 If you’ve ever watched “Hill Street Blues,” “NYPD Blue” or “Deadwood,” you know David Milch is one of the finest writers in the history of television. You probably know some other colorful facts about him, too. (Big-time gambler, former heroin addict, youthful protégé to Robert Penn Warren…)

I’m about to tell you something you don’t know.

When I worked for David Milch in the mid-1990s, he told me he’d written a song in the ’70s called “Mood Ring.” The song was recorded by Root Boy Slim & the Sex Change Band.

I was quite familiar with Root Boy; he’s a boogie-rock legend in the D.C. area. Born Foster MacKenzie III, Root Boy Slim attended Yale, as did Milch. From stories I’ve heard, both of ’em were wild as fuck. It was Milch who told me MacKenzie used to perform as “Prince La La.”

(From the Root’s Wikipedia entry, I now see that he and Milch were fraternity brothers. Along with George W. Bush!)

Anyway, I asked Milch whether he was pulling my leg about “Mood Ring.” He’s not a credited co-writer on the song. David told me it’s true; he wrote those lyrics.

So, by way of wishing my old boss well with the new show, I share with you one of his hidden early works. Click here and enjoy “Mood Ring.”
Posted by Undercover Black Man at 4:48 PM

I'm a fan of Milch's, but my respect for his work is tempered by his assertion that black people have difficulty writing for white audiences/attaining commercial success because their imagination and outlook are shaped by their racial experience.

I'm not hearing good things about "John from Cincinnati". Matt Roush from TV Guide and Tim Goodman of the San Fransisco Chronicle describe the show as a "mess" for the first 3 episodes.

Oh how I miss Deadwood.

The reviews are decidedly mixed. But it's Milch, so I'm prepared to give him a full season before I make any declarations on the show.

I spent the entire first season of Deadwood thinking it's a very unique, well acted western. However, it wasn't until the first finale aired that I realized how profoundly brilliant it was.

anonymous: did you witness him saying, writing stating this somewhere? Or is it a quote that is spread with anyone bothering to find out more about the context?

Theoretically: I could even imagine a scenario were a White Man, would say something like that to force out black-creative-energies. Since: if I were black this statement would make me really mad, and anger leads to adrenaline and that needs motion.

One can be damn good, when one is am mad, if one learns to channel the anger.

or with nobody bothering

I am here English to learn tomorrow I start Kentucky steak house.

Believe it, LeaNder. Milch made those comments in public, at a writers' seminar. Someone gave a tape to the Washington Post, they wrote a big piece, and it was a public-relations disaster for Milch for about a week. (Jesse Jackson phoned ABC executives, etc.)

But one good thing came out of all that. Milch hired me! True story.

& sorry anonymous. If you are a writer. Fucking, blood, proof him wrong. Dammit!

Is that when you wrote that NYPD Blue episode where Sipowicz truly shows his racist side? (It's mentioned in the book 'the N Word').

It is an interesting question though...the Cosby show and Fresh Prince from Bel-Air were both "black" shows yet they appealed to large white audiences too.

But as far as I can tell, no black drama has appealed to whites, or am I missing something?

Hey S.J. Actually the N-word episode I wrote for "NYPD Blue" was after I was already hired. I think it was the fourth script I wrote for the show, and by then Milch had taken me under his wing.

That's the cool part, by the way. Milch didn't hire me just to get Jesse Jackson off ABC's back. He gave me a shot, I rose to the occasion, and he became a true mentor to me.

As for the black drama thing, "Grey's Anatomy" has proven that a black writer can create a show that appeals to a mass audience.

And "The Wire" has proven that a show largely about black people can achieve the level of art, and appeal to a select audience across racial lines.

There is still resistance in Hollywood to create dramas with black lead characters, in large part because those shows are harder to sell overseas, and that's where the studios get half of their income... foreign sales.

Thanks for the reply UBM.

I think it's time I rented the NYPD Blue DVDs...I never got around to watching it.

You are right, Grey's Anatomy is a good example of black writers appealing to mass audience, albeit doing it with mostly white lead characters.

One question about The Wire though...was McNulty chosen as a "lead" (I use the term loosely) character by the writers or did HBO force them to have a lead white character? Even for a network as daring as HBO I can see how a black lead could be cause for concern. I ask this because Baltimore is a city with a 65% black majority.

^ SJ: First of all, I'm overdue for thanking you for sending some Facebook viewers my way. With Site Meter, I can tell where people are coming from... and quite a few have followed you links to me. Thanks!

As for McNulty, hey, sure... white viewers are presumed to need a white character to latch onto. No problem. Plus, there's no reason for a white detective not to be prominently featured... that's being true to most big-city homicide bureaus. It's all good.