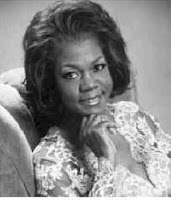 I’m pleased to present here an interview with Ernestine Anderson, a singer whose career spans nearly 60 years. Jazz writer Andrew Gilbert talked to Ms. Anderson by phone in August of 2004.

Born in Houston, Anderson toured with the legendary bandleader Johnny Otis in the late 1940s. She recorded a few LPs for Mercury between 1958 and 1960. But her reputation as a solo artist soared with a string of albums in the ’70s and ’80s for the Concord label.

Ernestine Anderson is still going strong at age 78. Her most recent CD was the 2003 set “Love Makes the Changes.” And she’ll be performing tomorrow night through Sunday at Jazz at Pearl’s in San Francisco.

ANDREW GILBERT: When you first started gaining attention with Johnny Otis, what kind of songs were you singing?

ERNESTINE ANDERSON: I really don’t remember the songs I sang, but they were big-band songs. Johnny Otis had several bands. After the first big band there was another one with Little Esther Phillips on a tour headed by the Ink Spots. It’s hard to remember, it was so long ago.

I actually started in Houston with a band headed by Russell Jacquet. During my earlier days I just seemed to connect to big bands. When I was coming up, singing with a big band was how you learned and honed your craft. You learned how to sing in front of an audience and you learned from the older artist on a show, picking up whatever you could.

GILBERT: Tell me about some of your early influences.

ANDERSON: There were so many, but the earliest one was Ella Fitzgerald. Sarah Vaughan was one of my idols.

Before that, I used to listen to big bands a lot on the radio when I was growing up in Texas. My dad had some kind of radio where you could get broadcasts from far away and I used to hear bands like Erskine Hawkins and Jimmie Lunceford. Billy Eckstine was one of my favorites. There were just so many people and I listened to everybody, including instrumentalists.

In fact, I got so engrossed with Sarah when I first heard her that I tried to sing like her. Then I was told by this person, I should try to find my own identity, that was the only way I was going to have any success in this business. So I stopped listening to singers and just listened to instrumentalists for a couple of years. That’s how I got away from being influenced by other people.

GILBERT: You started gaining some serious national attention when you joined Lionel Hampton’s orchestra in 1952. How did you end up with Hamp?

ANDERSON: Hamp was in town and my husband heard that Betty Carter was leaving the orchestra and that he was looking for a singer. He pushed me to go and audition for the band and I got the job.

I traveled with that band for a year, and it was one of the hottest bands that Lionel ever had, with Art Farmer, Jimmy Cleveland and Gigi Gryce. Quincy Jones was there too and he was writing for the band, and Jimmy Scott was the other singer.

GILBERT: The band may have been hot, but like a lot of Hamp’s vocalists, you didn’t stay with the orchestra for long.

ANDERSON: The band was going to Europe and I decided to stay in New York and go out on my own. I’d done two songs on an album that Gryce put together. Someone heard this album and asked me to go over to Scandinavia with Rolf Ericson, a Swedish trumpet player, and it was wonderful, a great experience. I found out that the Swedish people love jazz. I found that out to be true all over Europe and Asia, every place except our own country.

GILBERT: Right, making it in Sweden doesn’t necessarily open doors back in the States. But you had some help from San Francisco Chronicle critic Ralph Gleason, one of the founders of the Monterey Jazz Festival.

ANDERSON: When I first came back to the U.S. from Sweden, I moved to San Francisco with my first album, which featured a Swedish orchestra – “Hot Cargo” with the Harry Arnold Band. I had an acetate of the date and I played it for some people here in Seattle.

GILBERT: You were recording for Mercury through the early 1960s, and then the bottom fell out for jazz musicians. How did you handle the loss of work?

ANDERSON: When rock ’n’ roll became the music of America, I moved to London for two years. In order to keep working I had to leave the country. When I came back, that’s when I joined the Buddhist faith, that kept me going.

I stopped singing for a while. I just didn’t want to go through the hassle of starting all over again. I decided maybe it was time for me to give it up, and that’s what I did. I came home to Seattle.

GILBERT: So what got you back on the bandstand?

ANDERSON: A couple of years later I started getting the desire to sing again. A friend, the bassist Red Kelly, had a club in Tacoma and I used to go up there to sing every weekend for a year, just getting my throat together again.

Another friend had a jazz festival on Vancouver Island, and he asked me to do this gig, and everybody was there – Monk Montgomery, Ray Brown, so many musicians. At the end of it Ray asked me if I was ready to come back and start singing again. I told him I needed a record, I couldn’t just start cold.

He called me a week later and said. “I’ve booked you at the Concord Jazz Festival and they’re going to record you there.” That was my first album after getting back in the business. Ray Brown was responsible for that.

GILBERT: You had a pretty great run with Concord.

ANDERSON: I was with them for 15 years. Carl Jefferson really had his hand on the pulse of the music, the jazz situation, how to record different artists. And once a record was made, he knew how to get behind it and promote it. He was a giant that way. And he was known in the business for making quality records, soundwise and everything. Of course he had one of the greatest engineers, Phil Edwards.

GILBERT: No matter what the setting, your music always swings. But I feel like your audience really loves it when your voice gets a little rough and you start to testify.

ANDERSON: I love jazz, I love all kinds of music. But I really love the blues.

That is one of the best grooves I have heard in a while. Funky and swinging at the same time. Makes me want to take a long walk downtown on a Saturday night.

^ Life wouldn't really be worth living without some funky swinging music, B.

Thank you soo much for the wonderful interviews you share.
I love the article on Ernestine Anderson and would like to know if she is still practicing SGI Buddhism? She is a songstress living legend which I aspire to be compared to one day!