Imagine a time when the pride of the Negro race could be borne on the shoulders of one heavyweight boxer.

On June 22, 1938, Joe Louis knocked out Max Schmeling in the first round of a fight heard ’round the world... “one of the major sports events of the 20th century,” according to the International Boxing Hall of Fame. 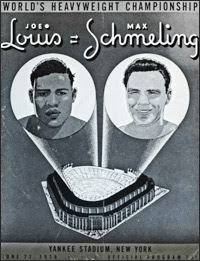 This was the rematch. Schmeling, a German, had knocked out Louis in 1936... the first time Joe Louis was ever beaten.

The rematch took place in Yankee Stadium, with millions of people across the globe listening live on radio. (It was broadcast in English, German, Portuguese and Spanish.)

Now, through the magic of Google’s Video Bar in the upper right corner of this page, I present four fragments of the 2004 PBS documentary about Louis vs. Schmeling – “The Fight.” You can purchase the complete film on DVD here.
Posted by Undercover Black Man at 1:03 PM