A shot of Jello Biafra, with a John Wayne chaser

“… The ‘Lifestyles of the Rich and Famous’ can kiss our funky booty-hole!”

“… For as long as you believe in love and faith, hope and God above, the future of this land of ours is strong.” 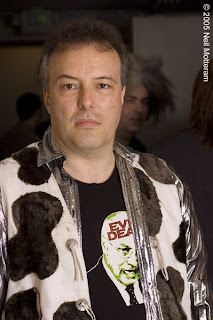 Left-wing rant, right-wing cant – two great tastes that taste great together. And I got ’em both streaming on my Vox audio stash.

Ever stop to ponder just how drenched in politicized media we are these days?

Three round-the-clock cable news channels with robot armies of ideological talking heads… quasi-populist gasbags all over AM radio… amateur spin mechanics, like Roto-League fanboys – thousands and thousands of them! – spraying piss in all directions of the blogosphere, as if Thomas Paine would be proud of their time-wasting asses…

And yet, the more politics becomes a mass entertainment, the less I’m feeling entertained. Or informed. Or even engaged.

So, as with music, I look to the fringes – and to the past – for stuff that’ll cut through the noise and make some sparks jump in the ol’ frontal lobe. Because when a witless, unctuous fucker like Keith Olbermann can be taken seriously as a pull-no-punches political commentator, it’s hard to make sense of anything anymore.

(To be fair, if our troops in Iraq were found to be using corked bats, Olbermann is the first guy I’d turn to for analysis.)

Now… though I’m old enough to have dug Dead Kennedys, I haven’t followed Jello Biafra’s latter career as a hard-left spoken-word provocateur. But this 12 ½-minute track, “Become the Media” (2000), is an amusing little diatribe about our commercialist culture (Booo!) and the need for class warfare (Yaaay!).

That’s what I call entertainment.

After listening to Mr. Biafra do his thing, you might need to buck up your patriotic spirits. Gotcha covered. Just play this track – “The Good Things” – from John Wayne’s 1972 spoken-word album, “America, Why I Love Her.” (Yep, the hard right was doing spoken-word when spoken-word wasn’t cool.)

I’m talking church bells ringing, fishin’ with dad, and firemen rescuing kittens from trees. “The Good Things” is so cheesy, so cornball… Mmmm, cheesy corn ball!… I swear to God, it’ll make you long for the days when America’s husbands didn’t cheat on their wives, and none of their kids turned out gay, and all the Negroes stayed on their side of the tracks.

My thanks to rock-’n’-roll photographer Neil Motteram for permission to use the above picture of Jello Biafra.

Be well, my friends. And remember: it takes a right wing and a left wing for a turkey to fly. 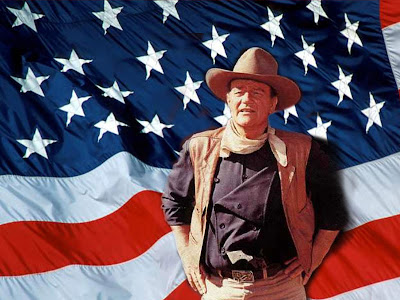 Posted by Undercover Black Man at 10:15 AM

Labels: Shot and a Chaser

Hi UBM. Thanks for posting these audio files and sharing your thoughts.

The John Wayne clip made me laugh much harder than the Jello Biafra clip.

You know, I've always been impressed at how the left (and for the record, I identify myself as a leaning left) is so quick to villify John Wayne for his politics when Wayne made probably the strongest statements on racism and discrimination in 1950s Hollywood in "The Searchers."

Ortho wrote: "The John Wayne clip made me laugh much harder than the Jello Biafra clip."

Oh baby... the kitten in the tree just lays me out!

And thank you, Ortho, for linking to this post on your blog.

Brendan: My friend David Simon loves "The Searchers." I keep saying I have to make a point of watching it... but I haven't yet.

I've always admired John Wayne regardless of politics. While his opinions were often very extreme and dated, unlike many people with very hardcore opinions on touchy subjects, he never seemed to hate those who disagreed with him. How else could one explain his working with John Ford all those years.

I remember when he made that awful Vietnam movie, "The Green Berets". It was ignorant of most of the key issues regarding the war and was roundly mocked and hated by most, quite deservedly. However, it would be another decade before anyone else in Hollywood had the balls to make a movie directly about the war.

That John Wayne track is positively begging for a techno remix.

I endorse a techno remix of that clip 100 percent.

UBM, not to derail the topic, but Mr. Simon knows what he's talking about. When it comes to serious discussion of what The Greatest Film Of All Time is, "The Searchers" frequently comes up. "Citizen Kane" will probably always be the most influential film of all time, but when you think about movies that informed and influenced the mind-set of the film school generation that came of age in the 1970s, "The Searchers" is still one pretty large towering beheometh. All that, and it's a visually amazing, thematically stunning picture. Could I *be* any more pretentious?

Rottin' wrote: "That John Wayne track is positively begging for a techno remix."

Brendan wrote: "When it comes to serious discussion of what The Greatest Film Of All Time is, 'The Searchers' frequently comes up."

Given its theme, I could probably get a good blog post out of it. I'm on the case...

I still have my "I voted for Jello" button, even if I wasn't old enough to vote yet when he ran for mayor of SF. I need to find that tee he's wearing, too.

Did you ever see the Oprah ep with Jello taking on Tipper Gore and PMRC? That was some good TeeVee.