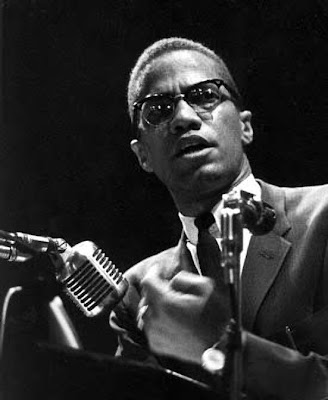 [May 19th is Malcolm X’s birthday. Below is a portion of an article I wrote for the Washington Post in 1990.]

A. Peter Bailey got his first taste of activism as a Howard University student between 1959 and 1961. During the Greensboro, N.C., sit-ins against segregated lunch counters, Bailey and other Howard students picketed the downtown Washington Woolworth’s to show their support.

Now a writer and lecturer living in Richmond, Bailey moved to Harlem in 1962, getting involved in rent strikes, school desegregation battles, “basically the civil-rights-integrationist wing of the movement.”

“My awareness of Brother Malcolm was strictly as the bogeyman that you read about in the newspapers,” he says, sitting on the floor of his cluttered apartment. “All of that changed in the summer of 1962 when I heard him speak for the first time.”

Bailey and his roommate noticed a crowd gathering at 116th and Lenox Avenue, outside the Harlem mosque. They decided to hear what the minister had to say.

Malcolm X “taught us that racism is not an aberration of individual white folks.” While the civil-rights approach was based on the assumption that whites could be shamed out of racism, he says, Malcolm considered racism “an integral part of the system.”

“Those speeches – those harsh, brilliant speeches that he was making in the early ’60s – you have to think of the times. In 1963 alone, Medgar Evers was shot down, that church was bombed in Birmingham that killed those four little girls, the fire hoses, the dogs,” Bailey says.

“He was verbally expressing the intense anger that a lot of black people felt but were afraid to say it. And I think his anger was righteous anger, because the government was saying, ‘There’s nothing we can do. That’s the states.’ ”

As captivated as he was by Malcolm X, Bailey did not want to join the Nation of Islam. He didn’t want to adhere to any religion at that point in his life.

But early in 1964, after splitting from the Nation of Islam, Malcolm established two separate organizations. Muslim Mosque Inc. would be his instrument for spreading orthodox Islam as he had come to understand it during a revelatory pilgrimage to Mecca, where he adopted the name El-Hajj Malik El-Shabazz. Malcolm said he saw that whites and blacks could achieve true brotherhood through Islam.

The second organization, strictly political, was designed to attract those, like Bailey, who weren’t interested in becoming Muslims.

Bailey remembers when a fellow activist asked him whether he’d like to join a new black-nationalist group. She didn’t say anything about Malcolm X.

There were 12 or 15 people at that first meeting in a Harlem motel room, Bailey recalls. “We were sitting around talking, and then Malcolm walked in with some of the Muslim brothers that were with him. And I remember thinking to myself, ‘Uh-oh, this is going to be serious.’ ” He smiles.

[TO BE CONTINUED]
Posted by Undercover Black Man at 10:07 AM