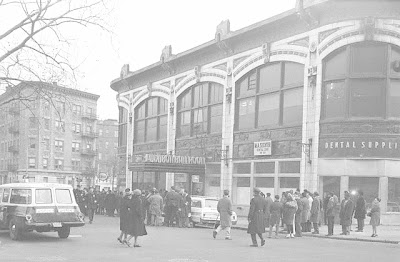 [Tomorrow is Malcolm X’s birthday. Below is a portion of an article I wrote for the Washington Post in 1990. This segment picks up the recollections of A. Peter Bailey, a writer and activist, at the point where Malcolm X had returned from Mecca as an orthodox Muslim, and founded a new black nationalist group.]

The OAAU’s purpose, as Malcolm X declared during a June 1964 rally, was “to bring about the complete independence of people of African descent here in the Western Hemisphere... by any means necessary.”

“To sit down with the man in a small setting and watch him talk and laugh and joke with people, and to be serious and really talk about his ideas – I don’t know how to say it except that it was an incredible experience in your early 20s to be a part of something like that.

“At the time, you don’t really think that you’re dealing with some kind of historical figure. You’re just dealing with somebody who you admire and respect. If I had been thinking history,” Bailey says, starting to chuckle, “I would have copied down every word he said. But I was thinking that he’s going to be around for a while. Despite the danger.”

The danger. Bailey says Malcolm “didn’t dwell on it,” at least around members of the OAAU. But they all knew of threats on Malcolm’s life after he left the Nation of Islam.

On the morning of Feb. 14, 1965, Malcolm’s home was firebombed while he, [his wife] Betty and their daughters slept. He publicly accused “the Muslims.”

The following Sunday, Feb. 21, Malcolm X was preparing to address a crowd in the Audubon Ballroom [near Harlem]. Chatting backstage with OAAU members, he said, “ ‘The way I feel today, I should not even be here,’ ” Bailey recalls. “It was the first time I’d ever seen him actually look weary. He looked harried.

“We told him, ‘Why don’t you go home? The people will understand.’ He said, ‘No no no, the people, they came to hear me speak, and there are things I have to tell them.’ ”

Malcolm then instructed Bailey to go outside the ballroom and wait for a local activist Presbyterian minister who was also scheduled to speak. Bailey was still waiting outside when he heard Malcolm X issue his customary Islamic greeting over the loudspeaker: “Salaam aleikum” (“Peace unto you”).

“Those were the last words I ever heard him say,” Bailey remembers. “The next thing I heard was shooting. It literally sounded to me like hundreds of shots.”

When the shooting stopped, Bailey ran down to the stage. “His shirt was opened and I could see the bullet holes all in his chest,” he says. “I can remember thinking to myself, ‘He’s going to die.’ Of course, the feeling was one of intense rage and frustration.”

The assassins effectively killed the OAAU along with its leader, says Bailey, who continues to label himself a “Malcolmite.”

Paul Lee, 29, and Zak Kondo, 30, have devoted their lives to the study of Malcolm X. Both became fascinated with the man during their early teens.

“He was 24-hours-a-day committed to the freedom of our people,” says Lee, a professional researcher living in Highland Park, Mich.

Focusing on Malcolm X’s travels, Lee says that Malcolm spent 27 of his last 50 weeks abroad. “This should give you some idea of the importance he assigned to gaining international support for our struggle. He was in a real sense the foreign minister of African Americans.”

“And Africans you talk to abroad feel that no African-American leader since Malcolm has exploited the opportunity that he created.”

One of Malcolm’s goals was to get the United States brought up before the United Nations for human rights violations against blacks. This is why Zak Kondo, among others, believes the U.S. government was the architect of the assassination.

Kondo, a history instructor at Bowie State University, has studied FBI files on Malcolm X, and says the agency “was very much concerned about where he went and who he talked to,” and that the government “was not appreciating what this one man was doing.”

He believes that FBI infiltrators or informants within the Nation of Islam fomented the internal conflicts that led to Malcolm’s expulsion in the first place.

Admitting that he can’t document any FBI plot to “neutralize” Malcolm X, Kondo says, “That’s one of the problems that any researcher comes across. Agents are taught not to put certain things on paper.” But “one thing we do know is that assassination is not alien to the U.S. government.”

[For a rich archive of texts related to Malcolm X, visit www.malcolm-x.org.]
Posted by Undercover Black Man at 6:25 AM