The words of Chief Red Jacket 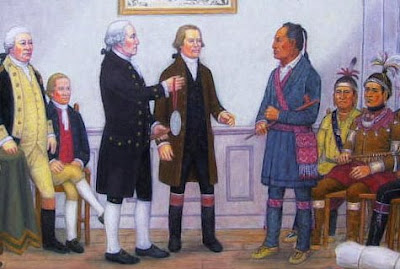 This is the day when Americans give thanks... thanks that the original inhabitants of this land didn’t act in their own racial and cultural self-interest and slice the throats of every European who disembarked from the Mayflower.

As part of my American Indian Heritage Month celebration, here’s a post about Sagoyewatha – also known as Red Jacket.

Red Jacket, a chief of the Seneca Indians, is remembered today as a gifted orator and important Native American diplomat during the early years of the United States.

Representing the Iroquois Confederacy, he kicked it with U.S. presidents such as Washington, Monroe and Andrew Jackson.

He acquired the name “Red Jacket” after his service to England during the American Revolution. He’d been a swift-footed messenger for British military officers, and they rewarded him with a richly embroidered scarlet jacket. (Red Jacket would later support the Americans against the British during the War of 1812.) 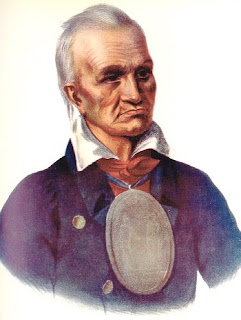 Red Jacket was primarily noted by white writers of the 19th century for his racial politics.

In modern language, he was a separatist. In the words of one writer in 1879, the Seneca chief “hated civilization... detested education and Christianity, and made no pretence at conforming to the polite customs of white society.”

Journalist William L. Stone, in his 1840 book “The Life and Times of Red-Jacket,” wrote that Sagoyewatha, by 1805, had “become utterly averse to any farther intercourse or association with the whites – having arrived at the conclusion that the only means of preserving his race... would be the erection of a wall of separation, strong and high, between them. ...

“He was opposed to any farther sales of [Indian] lands. He was opposed to blending the races by intermarriage – not unfrequently murmuring that, whereas before the approach of the white men the eyes of their children were all black, now they were becoming blue. ...

Red Jacket’s most famous speech was delivered in Buffalo Grove, New York, in 1805. It was in response to a young white missionary named Rev. Cram, sent by the Boston Missionary Society to propose the establishment of a mission among the Seneca.

“Brothers: I have not come to get your lands or your money,” Cram said, “but to enlighten your minds, and to instruct you how to worship the Great Spirit agreeably to his mind and will, and to preach to you the gospel of his son Jesus Christ.

“There is but one religion, and but one way to serve God,” the missionary continued, “and if you do not embrace the right way, you cannot be happy hereafter. You have never worshipped the Great Spirit in a manner acceptable to him; but have all your lives been in great errors and darkness.”

The council of chiefs discussed the matter among themselves, then Red Jacket delivered his reply. He spoke in the Seneca language, his words translated by a U.S. government interpreter.

Would you like to hear what Red Jacket said? The English version was recorded in 1976 by Arthur S. Junaluska, a Cherokee playwright and actor, for an album called “Great American Indian Speeches, Vol. 1.” 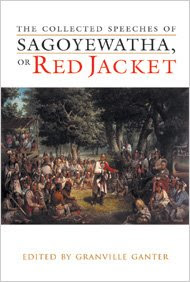 Click here to hear it on my Vox blog.

You can download the MP3 by following this link to AmericanRhetoric.com.

In 2006, the Syracuse University Press published “The Collected Speeches of Sagoyewatha, or Red Jacket” – the first comprehensive collection of the chief’s words.

Happy Thanksgiving!
Posted by Undercover Black Man at 10:22 AM

The Red Jacket speech was straight up truth, too bad it fell on deaf ears. Showing love and respect for all that God has created is such a simple thing, like second nature. I cannot understand at all how some folk are incapable of loving and respecting others, but if it ain't in ya then there you have it. Some people will always be masters of mayhem.

That is a great speech and one that is sadly still relevant... Once again I am reminded that while I'll never know everything I can certainly work on knowing more-- never heard of Red Jacket, don't know much about the history of Native tribes as the Europeans crossed over... Thanks for the education...

wow--Red Jacket understood Christ better than the people who came over here killing in His name.

Iroquois civilization had a tremendous influence.