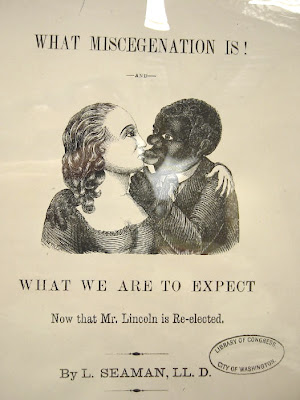 In honor of President-Elect Barack Obama, I’d like to share a page from America’s racial and political past.

In 1864, after Abraham Lincoln was re-elected in a landslide, someone using the name “L. Seaman” wrote an eight-page tract titled “What Miscegenation Is! and What We Are to Expect Now that Mr. Lincoln is Re-elected.”

It was a snarky vision of a world turned upside down. And it dripped with contempt for colored folks (referred to by slave names such as “Sambo,” “Cuffy” and “Pompey”).

For your reading pleasure, I’ve put an excerpt below.

You can read the whole thing online by following this link to Cornell University’s Samuel J. May Anti-Slavery Collection.

L. SEAMAN: Cuffy’s good time is come – his millennium is at hand. Millions of treasure is expended daily for his benefit. The blood of whitemen is shed in torrents for him.

Mr. Lincoln says the war must be prosecuted until slavery is abolished. Henry Ward Beecher said in his Fifth Avenue Hotel speech... that “When this war ceases, slavery will be gone. It will be out of the way.” He considered that “every drop of blood spilt without accomplishing that certainty squandered.”

Of course Mr. Beecher must believe the war is for the negro, and Mr. Lincoln declares that the war will stop when slavery is eradicated – hence our conclusion that Sambo’s good time is come – that his millennium is at hand – that his star is in the ascendent. White men, just stand back and let the conquering heroes pass. ...

Gradually, for the past four years, public sentiment has been setting in Pompey’s favor, and if it continues thus, at the same ratio, at the end of the next four years dark complexions will be fashionable – white and pale faces will be discarded.

The ladies, instead of applying white chalk to their faces, will use char-coal with profusion; instead of a small delicate foot being the rage, big flat understandings with projecting heels will be all the go; instead of puckering up their lips to make their mouths look small, they will be turning them inside out that they may resemble Dianah’s ruby lips. ...

The front seats in places of amusement will be reserved, invariably, for colored folks. Congress will soon pass a law making the colored man a legal voter, and declaring him eligible to office; he will occupy public positions, from policeman up to President. ...

Pompey will be Mayor, Judge, and Governor. Our Legislators will be of the thick-lipped and wooley-headed fraternity. Colored men... will ride in their carriages with a white man on top as driver, and perhaps have another on behind. Things are changing. They are being reversed. ...

Since the re-election of Mr. Lincoln, the Blood Royal of Africa – the crème de la crème of colored society have been extremely jubilent. Soirees d’Afrique are being had throughout the country. Boston, Philadelphia, Cincinnati and New York, have all been favored with their jubilent demonstrations.

The late emancipation proclamations, the re-election of Mr. Lincoln, together with the recent decision of the people of Maryland to discard Slavery, has given our colored Brudders a good opinion of themselves, and they have become the aristocracy, proper, of the country. ...

There is a sound of revelry every night, and Africa’s sons and daughters (her beauty and her chivalry) trip the fantastic toe; gorgeous lamps shine o’er fair women and brave men; a thousand hearts beat happily; and when music rises with its voluptuous swell, shiny eyes look love to eyes which speak again, and all goes merry as a marriage bell.

I'd like to put my big flat understanding up L. Seaman's arse.

What's wacky, there'sstill a segment of the population that feels that way.

This country's racist history has been so wacky, prevalent and persistent.

LL.D!? Guess having a doctorate gives you license to publish crazy sh*t.

This country's racist history has been so wacky, prevalent and persistent.

From amid this 144-year-old trash, a couple of bright nuggets shine across the centuries . . . reflecting progress:

"There is a sound of revelry . . . a thousand hearts beat happily."

Oh yes they do, though not in a ay L. Seaman ever could have imagined or appreciated.

"The greatness of America lies not in being more enlightened than any other nation, but rather in her ability to repair her faults." -- Alexis de Tocqueville

"The ladies, instead of applying white chalk to their faces, will use char-coal with profusion"

I bet they could cook a mean steak with their cheeks.

Charcoal? No, now it's tanning beds and gore-tex in the lips and booty.

And the difference between this and the interview you ran the other day with David Duke is what, exactly?

Same thing, different day. This is not reelevant as history, it's relevant because most it came true and some people are saying the same thing in their basements right now. He was dead on about the lips, though.

Thanks for posting, UBM.