So I did my usual thing last night – getting out of the house to avoid trick-or-treaters. There aren’t many kids on my block anyway. But I... well, I just wanna be left the fuck alone.

Figured I’d see a movie. So I went to Glendale’s new upscale mall, the Americana. Checked out “RockNRolla.” (Maybe I’ll blog about that next week. I have a few thoughts.) 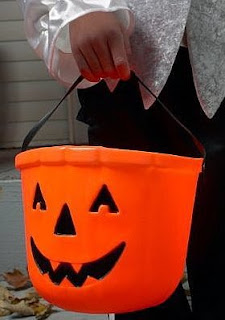 Anyway, there were lots of teenagers in Halloween costumes at the mall. Plus a lot of little kids in costumes with their parents. And the little kids were trick-or- treating the stores.

Did you hear me? The little kids... were trick-or- treating... the stores!

Goodness gracious, have you ever heard of such? And the stores were ready for this! They had candy!

Matter fact, Anthropologie had a tall blonde chick dressed up like a princess to pose for photos with the little ones.

Yeah, it was cute, but damn... trick-or-treating at stores? That’s not what it’s supposed to be about.

I walked into Urban Outfitters... approached a woman working there. I said: “I didn’t know kids trick-or-treated stores now.”

“I know, right?” she said, smiling. “I used to walk blocks. We had to work for that candy.”

By the time I arrived, Urban Outfitters had run out of treats. But the kids kept on coming. So the woman was handing out “Free Yr Radio” stickers. And that was just sad.

What the hell is happening to the old ways? Do y’all know about this? How long have parents been taking their kids to business establishments for trick-or-treat?
Posted by Undercover Black Man at 9:01 PM

My friend took her 6th month old to trick-or-treat at the mall. It was packed. I guess it's safer going to Footlocker than getting a razor plade in your apple from the crazy cat lady's house.

^ Life is in every way worse than it used to be. Except for the black president part.

It's been goin' on at least 15 years - but we never took our kids there; just didn't seem right. But I understand why it came into being.

I've seen some of the suburb/downtown areas around here doing it. Didn't go by any of the malls, but I imagine it's up here as well.

15 years ago I worked at The Big Software Company Up Here, and people brought their kids to work to trick-or-treat in the corridors! People handed out candy in the offices. Weird.

Stores were doing this when I was a kid in the eighties, when there were lots of stories about people poisoning candy or putting razor blades in candy apples. Where have you been?

Well it wasn't like you were home holding it down, now was it? Personally I live for handing out candy and grinchisms.., I buy a gank of stale, two year old mexican pinata candy (some of it's actually pretty tasty and some of it's inedible but it's all colorfully wrapped) and then I buy an equivalent amount of good Hershey's love.

For little kids who're authorized to come through, they get the good love. For rusty busters who made no costume effort, pinata candy. For teenagers who have no business, a snide scolding and some inedible pinata candy.

The thing that I find off-putting is the large number of caravans that come from outside the neighborhood and then disgorge their hordes of chirrens to come trolling..., oh well, that's what stale pinata candy is for. (you can buy like 5lbs of that shit for 3.99.

Shame on you, CN. Those kids who don’t meet your higher standards of "deserving" are merely victims of White Republican oppression, having grown up in less nurturing environments, and shouldn’t be abused in such fashion, when merely attempting to exploit what little leverage they have in the system, e.g., Halloween. Give ‘em a break. What haave they got to look forward to, just a life of OOW parenthood, brushes with the law, sub-standard employment, if any, and related societal victimhood at the hands of Whitey? Shame on you!

Furthermore, you are taking a big chance re-packaging the product as you described (short-sighted thinking typical of certain segments of society who have done less well): If *any* kid who visited your place should get sick, and adulterated/tampered trick-or-treat product should be suspected as the cause, and an investigation ensues, *you* will come under suspicion. Doesn’t matter that you had nothing to do with it, you definitely DO NOT want to be someone who handed out anything that wasn’t in the original factory-sealed package. In fact, in keeping with prudent risk minimization strategies which lead to better life outcomes, we have even considered bagging the whole Halloween thing, since giving out anything at all involves a certain risk in today’s litigious society. Hey, a kid, or a parent, could even slip/fall on your front steps/sidewalks. Perhaps UBM has the best approach...

FWIW, at Big Don’s, every kid gets a small Butterfinger, Snickers, or Nestle’s Crunch bar in the sealed package. Even the Blacks and Hispanics. All great stuff as carefully and deliciously verified by an extensive test program which usually ...uh ...consumes a significant fraction of the procured product...

Furthermore, you are taking a big chance re-packaging the product as you described

BD, did you drink your breakfast again this morning?

You may want to reread my comment when you sober up. Nowhere did I indicate a "repackaging" of anything. I suspect you've never gotten mexican candy, much less industrial quantity pinata candy, and wouldn't have the first semblance of a clue re: wtf I'm talking about.

CN - Not sure what a "gank" is but once you open *that*, it's not sealed anymore. You can easily unwrap/re-wrap (even if you didn't do that) those taffy blobs in twisted paper, if that's what pinata candy is. Not worth taking the chance...

For rusty busters who made no costume effort, pinata candy. For teenagers who have no business, a snide scolding and some inedible pinata candy.

How about the old double-dip? Remember that move? "Hey, you little greedy bastard... you were just here an hour ago!"

Anyways, Craig, I respect your attempt to impose a bit of moral order on a chaotic universe.

(But did you have to bring Big Don witcha?)

Not sure what a "gank" is but once you open *that*, it's not sealed anymore.

It's a big-assed bag of individually wrapped pieces featuring lots of variety.

Here's what I'm damned sure about BD, once you crack open that 1.75 liter bottle of Old Crow at 6:00am PST on a sunday morning, it's gonna be all down hill from you for the rest of the weekend....,

(But did you have to bring Big Don witcha?)

you know old dood covets the magic of Blackness and once he gets into the Old Crow, well....,

“I used to walk blocks. We had to work for that candy.”

Yeah, that's how the kids do in NYC. I was in a sandwich shop on Friday and noticed candy in jars on the counter. Although they were for sale I couldn't help but wonder if that's what the cashier would hand out when the kids started trick-or-treating.

I used to hand out candy (the good sh*t too) but I stopped last Halloween.

Funny you should bring this up. Halloween night I was in downtown Cedarburg, WI (this was where McCain & Palin had their big rally after their convention because Cedarburg's such a "quaint, ALL-American Town") and I saw this going on; kids going door-to-door at the various shops grabbing goodies. I remember thinking how long has this been going on?

I recall when we used to go out every Halloween NIGHT trick-or-treating. Then everybody got scared of perverts and kids getting hit by cars and most cities instituted trick-or-treating between noon and 2 p.m. on the Saturday or Sunday before the actual holiday. How lame is that?

Actually I think this is a good trend. The kids can hustle their goodies AT NIGHT in a reasonably safe environment and I'm sure it means more business for the stores.

What could be more American than that?

This doesn't seem too out of the ordinary, because I used to do it when I was too young to go trick-or-treating in neighborhoods.

BD- Not sure what a "gank" is but once you open *that*, it's not sealed anymore.

CN- It's a big-assed bag of individually wrapped pieces featuring lots of variety.

Oh. I thought it might be Klepto-Hood-Speak, i.e. Gank - a nominal amount you can easily slip under your coat in a few seconds when the proprietor isn't looking...

So this has been going on at least 22 years.

But I've gotta say, not to play D.L. Hughley or anything, but in my neighborhood trick or treating really wasn't a big deal. Hardly any of the kids dressed up, went house to house and asked for candy. That was something we thought white kids did.

Is Halloween not a black thing? I don't know. Just saying.

Store trick or treating is old in Philly too. The malls should prohibit it. It's ticky tacky.

Did you see the story about some battleax in Grosse Point Hills (?), Michigan who asked the kids whom their parents were supporting? If the kid said, "Obama," she wouldn't give them candy, saying, "I don't give candy to tricksters or liars!" She was denying four year olds candy!

The parents dimed her out to the local tv station who showed her house, gave her name, and interviewed her! She was unabashed. Boy, is her house going to get t'peed and egged next mischief night (or on Wednesday!).

this is how i feel often:

^Oh, that's messed up. Did she have to get all political on Halloween? Republican party pooper.

That was quick, DLT. I was responding to geneva girl. (But, I'm a fan of solitude, too.)

Oh. I thought it might be Klepto-Hood-Speak, i.e. Gank - a nominal amount you can easily slip under your coat in a few seconds when the proprietor isn't looking...

not when used as a noun.

"gank of" = "bunch of" - you know - like when a whole gank of truck drivers roll up on you in the mens room at your favorite truck stop and play dick pinata with your old crusty sphinctorials...,

Safety. There weren't a lot of negative happenings in the 80s in Pasadena, CA during Halloween but I understood what that was about, especially now that I'm the mother of a very young trick-or-treater.

Perhaps, CN, you should add that cultural tidbit to Wikipedia, you know, by way of leaving your high-profile footprint in history...

Anyhoo, at BD, we keep very precise logs at Halloween, time of visit, number in group, age estimates, and...uh...demographics. Engineers love data, allows you to see whuss-really-up. We average (last 15 years) in the low 40's of visitors. We only had 33 this year. Few high-schoolers, it was Friday, probably a game, parties, or other venues with more inviting hookup & OOW-breeding opportunities...

Boy, is her house going to get t'peed and egged next mischief night (or on Wednesday!).


I hope somebody eggs *her*. What a horrible woman.