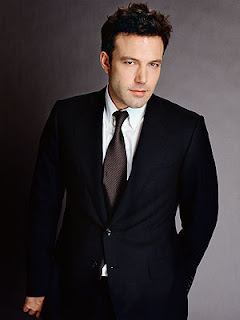 Let me say a few words about Ben Affleck. As a film actor he’s weak. And as a human being he pissed me off like no other celebrity has since I moved to L.A.

A few years ago, when I lived on the Westside, I was at a Starbucks when Ben Affleck strolled in to purchase a beverage.

Affleck took his drink to an outdoor table and proceeded to read a newspaper.

Then, as I walked to my car, I noticed a parking cop writing a ticket for a black Benz illegally parked in a “red zone.” Ben Affleck noticed this too... and he approached the officer.

From across the street, I could tell what was happening. I wanted to run at them, waving my hands and yelling, “Don’t do it! Do not rip up that ticket!”

But I just stood there. Sure enough, Affleck talked himself out of a parking ticket... a ticket that you or I or Joe the Plumber surely would’ve had to pay.

I thought: “That’s your life, isn’t it, Ben Affleck? Bonin’ Jennifer Lopez and parking in the red zone.”

Now... let me say this: When Ben Affleck hosted “Saturday Night Live” in 2004, he rocked it hard. Indeed, it struck me that this was the perfect forum for his talent... sketch comedy. He had voices, he had characters, he had great timing.

I would’ve advised him to take a year off from movies and join the “SNL” cast full-time.

Well, Affleck is hosting again tonight. And John McCain will make a cameo appearance. And word has leaked that “SNL” is planning a “savage” sketch making fun of Keith Olbermann.

I am looking forward.
Posted by Undercover Black Man at 3:37 PM

lol. this is why i love reading your blog.

because there's always something interesting to read, (or watch, or listen to), and some little insight that comes from who you are and where you live and how you think.

btw, who's the music tonight?

^ Thanks for that, maria.

The thing is if you saw Affleck on Mahr's show he no like Oberlmann, the parody is going to be done with some venom. He thinks Oberlman is just a lefty version of Mr. Loofah You know false equivalence if you damn both the far left(as if Keith represents it) and the right then it shows you are above reproach. Sucker move if you ask me. I do like the mostly politically aware Affleck except when he defends Palin without seeming to know what the heck he's talking about once again check Mahr's show. The other part to this is McNasty hates Keith you nuh he's going to be in the sketch with some painful "zingers" @ Oberlman if the Al Smith dinner was any indication. Peace, and by the way Si Se Puede

I saw Carl Weathers once. He had the butt of death. ;-)

Ben Affleck is one of the finest white boys who have the spotlight in celebrity-dome! Even if he didn't have talent, I wouldn't mind. *LOL*

I respect Ben Affleck. Sure, he has been in a lot of awful movies, but he's not that bad of an actor. And his directorial debut ("Gone Baby Gone") was pretty good. I've heard he and his brother are pretty big fans of The Wire.

UMB, not feeling the "ticket" haterade.... It's not a gimme, but it doesn't take a supa star to get out of a ticket in progress.

OTOH....Ben often acted like an over medicated jerk on Mahr's show not long ago.

"Everybody in your family ain't beautiful....everybody on your side ain't smart"....

... it doesn't take a supa star to get out of a ticket in progress.

Oh yeah? The time I tried, the meter maid not only finished writing the ticket, she kicked me in the nuts!

Hmmm...having just seen Ben's Olberman skit and his "wigger" UPS man...not so much.

UMB, not feeling the "ticket" haterade....

Not feeling it, huh? Put yourself in Ben Affleck's head:

"Mmmm... tasty beverage. I'll just sit here and enjoy this, and at the same time catch up on currents events with this fine newspaper. Fuck a red zone. The red zone don't apply to me... I'm Ben Affleck!"

cleavage and a smile can get you out of a ticket, too.

How much could the ticket have cost? He could probably reach between the cushions of his couch and come up with enough change to pay for it.

Reaaaly hate to admit it, but McCain was actually funny :-(

I like Olbermann, but Affleck gutted him like a fish, and while breaking character through half the sketch, too.

Nobody messes with The Fleck.

Also, with Olbermann, Affleck should’ve used a scalpel, not a hatchet.

Here's the news, but what do you think about?: 'Saturday Night Live' Political Skits Make Real Impact on Voters