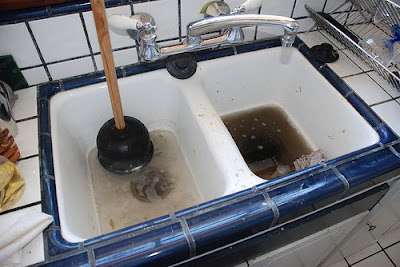 John McCain got his face broke this morning in Ohio. The video clip – an instant classic – is embedded below.

What’s beautiful about this clip is, it reinforces a narrative. A narrative about Team McCain being less competent (and less lucky) than Team Obama... on the day after Barack Obama rocked a Hollywood-style mini-movie on national television.

Last weekend, pundits said “Joe the Plumber” was gaining traction as a campaign issue... that this concocted symbol of Hard-Working White America was pulling voters toward McCain.

Now, this embarrassing moment will suck another day’s focus away from the major McCain talking point of Obama-as-socialist. David Shuster highlighted it on MSNBC an hour ago; the Huffington Post is leading with it; the YouTube clip has racked up 155,000 views already.

Just wait until the late-night comics have at it.

UPDATE (10/30/08): This clip was show twice tonight on Anderson Cooper’s show. And, of course, Keith Olbermann couldn’t resist hyping it on “Countdown.”

But McCain’s awkward moment wasn’t shown at all on Fox News, as far as I can tell. (Merely an oversight on their part, I’m sure.)

I know that feeling.

Here's a question no one is asking:
.
Joe the plumber isn't rich.
.
Does Joe not have to work while he is on tour? Is he being paid by the McCain campaign?
.
How is he supporting himself since he's obviously not been at work for some time now?

Perhaps they can get a different Joe the Plumber.

^ Yah... do it like Blue Man Group. Different ones in different cities.

I suspect Joe the Plumber was off working on his upcoming book deal! That or meeting with cousin Robert Wurzelbacher - Son-in-Law of Charles Keating (of the infamous Keating 5) to discuss investment strategies for their trust funds. I suppose he could have been off on a hot date. He is a celebrity now.

I heard he was really in Hollywood....getting a "plumber's crack"...so he cld legit his sh!t.