Rachel Maddow, will you marry me?

As you might remember, zillions of cable-news talking heads popped up during the O.J. trial. But Greta Van Susteren became a star.

Likewise, the 2008 presidential race has brought forth googobs of “political analysts” on CNN and MSNBC and Fox News... but only one new star. Rachel Maddow is the bomb! 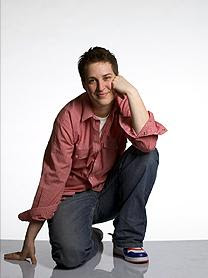 I remember when she used to appear on Tucker Carlson’s first MSNBC show, “The Situation,” back in 2005. I couldn’t get past the whole dyke thing. I mean, damn... this was the butchest female on cable news (with the possible exception of Donna Brazile).

And she didn’t seem to be a natural for TV. (See this video podcast she did last year to promote her radio show.)

Well, Ms. Maddow has blossomed this year like a desert flower... especially as a feisty participant in election-night panel discussions.

She’s whip-smart, she’s funny, and she don’t take nothin’ off nobody. Her wrassling matches with Joe Scarborough and Pat Buchanan have been epic.

Rachel Maddow filled in for Keith Olbermann last night on “Countdown.” She seems to have locked down the role of permanent guest host. She’s the Joan Rivers to Keith’s Johnny Carson.

Rachel is fit for the task. Check out the vidclip below from last night. She’s comfortable carrying the show on her shoulders, she’s steady in the pocket. She’s a star. People know this.

There’s something funny about this clip, though. I’ve always heard “Maddow” pronounced as if it rhymes with “wow.” (This C-SPAN dude does it. Heck... Keith Olbermann too!) But when Rachel introduces herself, she pronounces it like it rhymes with “shadow.”

Why hasn’t she corrected all the folks who’ve been saying it wrong? Maybe Rachel Maddow is just that nice!

Posted by Undercover Black Man at 10:36 AM

God she looks weird in all that makeup.

^ But it definitely works, Bay Radical. Some "image consultant" has really earned her money this time: The lengthening of the hair, the eradication of Rachel's dorkier mannerism, the wardrobe upgrade... these things have "softened" her and allowed her to rise as a mainstream television personality.

Now there's nothing to distract from her blasts of intellect.

I feel exactly the same way UBM. I've been listening more and more to her radio show and she's become my favorite TV pundit. You can't stump her. She has a definite POV but she's got the facts and research to back it up.

We're all huge Rachel Maddow fans in my household.

Dude, you read my mind, but I'll go a step further and say, butch or no butch, she's actually kinda hot in a late Showtime movie sorta way. Smart has a lot to do with it, but she's got kind eyes and a nice smile, cute lips -- oh hell, I've been married too long. Strike all that.

I know a lot of y'all probably think she should prioritize her message over what probably seems to you to be a distractingly unusual look, but for me, the power of seeing someone who looks sort-of-vaguely like me on national TV has even more impact than hearing that oh-so-rare articulate, unwavering, left-wing voice on the airwaves.

Watching her makeover process is depressing because she was literally the only true butch - fictional or real - on TV. She was helping to make that normal but now she's transforming into a look that, well, it isn't a busty Fox News babe, but its more or less mainstream. So freaky people like me go back to feeling like freaky people, instead of one part of the norm. Sad.

The makeup doesn't work at all on her. She looks like a little boy playing dress up. Speaking as someone who knows, there are legions of us out there who prefer our Rachel on the butch side.

UBM the way Rachel handlers her self amongst an all male dominate field, let's just say she makes a sister proud. She is being who she is and not having to change herself or be phony.

The time she made Joe walk off the set was priceless. She is good at what she do and it shows in her work.

I'm more concerned about her 'Q' than her 'do'. Sometimes I've seen her and asked "Where are the pearls?"

It's important to get her ideas into the MSM, and if pearls do it, that works for me.

While I'm happy for her that she's on the road to the hosting job she wants, I'm afraid the role of political lion tamer demands personal political opinions be expressed as little as possible, and that's NOT what I want from Rachel Maddow!

The time she made Joe walk off the set was priceless.

Yes, JJB! And I like Joe. But he can't deal with her. I think she gets under his skin.

UBM, are you the the opposite of a fag hag? This seems to be a gal-pal week for you. I did a quick review of a week's worth of your posts and noticed the trend. (I've been in the States for a week and have been over-indulging myself in everything American and hadn't had time to check out your blog.)

I did catch part of Rachel's show last night and thought she was quite good. I enjoyed watching her on TV vs. online like I normally do. The contrast between her picture on your site and the almost glamour girl on TV is striking.

UBM, are you the the opposite of a fag hag?

Wait till I drop this on you!

Did you catch her and Joe last night? I thought it was pretty even but when he throws out that cheap sexist comment at the end I had to tip the meter her way.

What does one call the opposite of a fag hag?

Word! She had me after the very first time I watched a clip of her some time ago in one of many debates with Joe Scarborough. I'd never seen Joey so restrained... unwillingly so, which made the clip even funnier. I think he walked off that specific show - I can't remember which one it was though.

What does one call the opposite of a fag hag?

GG, there actually is such a term.

I didn't even know she was gay.

And thank God she hasn't put on the obligatory bull dyke 80 lbs of fat.

Dressing like a man, cropping your hair like a man, sure, that I understand, it helps bull dykes to get into the dom role (and the femmes to get sub), but the 80 lbs? I still haven't figured that one out.

You never cease to amaze me.