DeAngelo Starnes broke the news to me that Hiram Bullock died last Saturday. He had throat cancer.

Bullock, a funky guitar virtuoso, became familiar to watchful TV viewers in the 1980s. He was a featured sideman in Paul Shaffer’s band on “Late Night with David Letterman”... and in David Sanborn’s band on “Night Music.” 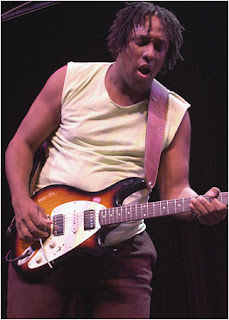 Bullock had a prolific career as a session player before finding international success as a solo artist.

The JazzTimes obituary by Jeff Tamarkin is here.

In memory of Hiram Bullock, I’m streaming a track on my Vox blog.

Click here to hear his studio cover of “Don’t You Worry ’Bout a Thing” from the 1997 album “Carrasco.”
Posted by Undercover Black Man at 9:32 AM

RIP Hiram, loved your time on Letterman and your work with David Sanborn.

I remember him on the Letterman show, playing a wrecked Strat, barefoot on stage.

My favorite Hiram memory is the time I was between junior and senior years in high school. Me and some buddies went up to Red Rocks to check out Bob James. For those who don't know, Red Rocks Amphitheatre is one of the most beautiful places to see a concert in the world. Located about fifteen miles outside of downtown Denver in the foothills to the mountains. Massive red rock and boulder formations frame the seating area and the stage. Under the stars, looking at the stage, you could see downtown Denver from the elevation.

Red Rocks used to have general admission seating throughout the spot. We got there early. Drinking brews and passing joints thoughout the place, we freaked when Bob and them came out for sound check. I was immediately struck by the restless brotha on guitar walking back and forth across the stage playing this NASTY rhythm lick nonstop. Drum check, horn check, Bob's piano check, bass check, dude would not stop playing that nastiness which just kept getting nastier as he riffed on his riff. Finally, the drummer kicked in, followed by the bass. Sax player started soloing over that shit. Bob couldn't take it now more. He got involved. Jammed for about ten minutes. Weed had us hollering, which got them amped up, I think.

During the show, after the sun went down, they played this number. There came a break. There was this guitar with overdrive, mid-range to high squeals on echo and delay. So we're searching the stage looking for the guitar player. As we searched, the solo just got more intense. Finally, the spotlight comes on, and Hiram is tearing that shit up three rows down from where we were, and we were sitting about halfway up. Engulfed in shameless marijuana smoke and fans getting off on that shit, Hiram squeezed the high notes outta that Strat and made his way back down as Gary King and Idris Muhammed kicked off a funky backbeat. Band of Gypsyish.

Shit, I'm getting emotional thinking about that moment. Hiram, here's to you from a brotha who you touched. Sorry I didn't catch you with Jaco and Kenwood Denard when y'all came to Blues Alley, which was often.

^ I love that story.

My mate came home from a gig last Sunday with the news (he'd heard from another musician) that Hiram had passed. I was so sad to hear that. I never saw Hiram live, but had long loved his playing. I immediately went to his MySpace page to leave a comment...and as I scrolled down to get to the comments section, I was shocked to see that I was in his top friends. Have no idea why...never met him. Maybe the little message I sent with my friend request had touched him in some way...don't know...but it made me realize yet again that we often don't take a moment to let people know how much they mean to us. R.I.P. Hiram...and thank you for gifting us with your talent.