Something for the white folks 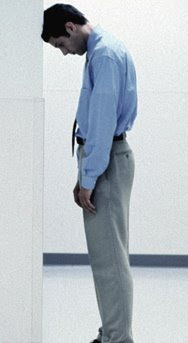 I love white people. I do. And it hurts my heart to see some of them in such anguish during this election cycle.

From having to endure 15 seconds’ worth of the fiery preachments of the Rev. Jeremiah Wright, to being confronted in the media with a phrase like “typical white person”... let’s face it: it has never been harder to be white in America.

On the positive side, y’all still own everything worth owning. So it balances out.

But for some white folks, the future looks grim indeed. Far-right blogger Lawrence Auster says the election of Barack Obama as president “would be like four years of blacks dancing in the street over the OJ Simpson verdict.”

Or, to unpack that thought, “a four year long post-OJ Simpson acquittal extravaganza, in which the full madness and idiocy of black America is on display...”

Obama is “outright evil,” writes Mr. Auster. “This man is... the most sinister figure in American politics in my lifetime.”

Lawrence Auster needs a pick-me-up. So for him – and those who think like him – I offer something to brighten your day... if only for a couple of minutes.

"As I recall from my Western civilization classes many years ago, the Revolutionary elements that overthrew the aristocratic order in France were the "liberal" French elite and academics. However, they were eventually turned out by the lower classes they liberated. The aristocrats and intellectuals were themselves then sent to the guillotine. It took Napoleon to restore order.

We see history rhyming again today. The white liberals are already being challenged (and will soon be replaced) by the minorities they have worked so hard to advance.

Soon the Southwest will have mostly Hispanic reprensentatives and most of the states with large minority populations will replace the white liberals with blacks, Muslims, and other assorted non-whites. I guess it is inevitable given the large increase in the non white population."


I can't even get worked up anymore. There are too many folks out there that are too stupid to be human.

You know, it may be the hardest time for me to be a white person in America, but I have to say, it is still pretty damn good.

Auster is a dinosaur. Like the dinosaurs, his kind will be around for a while; but his time is up. He knows it.

We whites are happy because a non-white Eurasian boxer scores a knockout on youtube? Because?

But, you are right. A lot of whites are not going to be happy if Barack wins. That is their problem. They are feeble minded.

If millions of Irish-Catholics danced in the street in 1960, why can't blacks in 2008? Believe it or not, there are not 200,000,000 white racists in America. One white racist is way too many, but they probably represent less than .01% of the white population.

^ Thanks, Vince. You get my sense of humor.

And you know white guys love them some Klitschko, right? Slav or no Slav. (In a pinch, you take what you can get.)

Jeezus, thank God it was Klitschko. In the pixelated preview, I thought it was Chuck Wepner. You wouldn't do that to us, wouldya?

This is like thinking that Dirk Nowitzki somehow makes up for an NBA without John Stockton. Hell, even Steve Nash is Canadian and worse, a closet soccer player.

Seriously, how a guy like Auster could even think that Obama is more "sinister" than someone like Rove or Cheney is unfathomable.

"Hell, even Steve Nash is Canadian and worse, a closet soccer player."
A hearty LOL from North of you.

Somewhere Gerry Cooney is watching and small tears of joy are welling up in the eyes of us whites everywhere.. sniffle sniffle

ps where can us Whites buy the dvd's? Amazon? Ya'll know how much we love buying things from the interwebs (so we don't have to mix with the mongrel races).

THIS is the man white boxing fans are loving right now. And rightfully so.

He applies backs to mats.

Lawrence Auster says the election of Barack Obama as president “would be like four years of blacks dancing in the street over the OJ Simpson verdict.”

Boo-f*cking--hoo. I can't even BEGIN to feel his pain.

"Dancing in the streets?" Please, Black people are the most forgivingest people in the world. If all we cared about was payback, there would have been hundreds of thousands of Nat Turners and Denmark Veseys.

Oh, thanks man. I needed that. Okay, back to the culture wars, where I'm getting my ASS kicked ever which way...

Peace, love, harmony, humility, compassion, ...seems some folks were created totally devoid of the capacity for even understanding, let alone living by what these terms describe.

Do you know the answer, ...well I bet some folks think they know, ...probably those same folks looking up the words peace, love, harmony... in Websters right now.

Fish,pass to the left hand side.
Many share your dream,but reality is a bitch.

Each makes his/her own, ..collectively - a stew ...cosmic slop?

Then again, "life is What ya Make it" - said Buddy Miles?

But then again, again, ..all is as it should be,

Klitschko is the best bum of the stock of bums that make up the current heavyweight ranks - a bum knocking out bums.

Actually, I even think that bum Roy Jones could probably break Klitschko on a good night.