Bay Area jazz writer Andy Gilbert hooked me up like I haven’t been hooked up in a while.

McCoy Tyner has been high on the list of musicians I’ve wanted to see in person. On Friday night, Tyner’s trio performed at Davies Symphony Hall in San Francisco. And there I was in the front row. 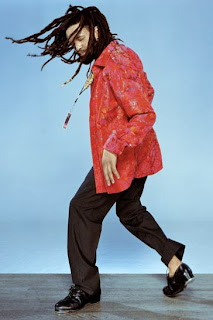 The surprise was tap dancer Savion Glover, who has been touring with Tyner for the past month. It’s a breathtaking collaboration.

Glover functions not as a dancer but as a fourth musician... a master percussionist trading licks with the drummer, with the bass, and with Tyner’s thunderous piano. Glover gets a wide variety of sounds out of his kelly-green tap shoes.

Early in the show, while Glover stepped jauntily to “Blues on the Corner,” he had a smile permanently fixed on his face. I did too. Looking around, I saw everybody in the audience with the same smile.

Glover and the band earned a standing ovation for their performance of “African Village,” one of Tyner’s signature tunes. It’s a thrill to watch the sweat rain off Savion Glover’s face.

Based on Tyner’s tour itenerary, no more shows with Glover are scheduled. But if that changes, I’ll let you know. You have got to see this if you can.
Posted by Undercover Black Man at 3:14 PM

Sorry I missed you in my hometown :-) Davies is a great place to see a performance like that; Tyner is one of the last of the living jazz greats.

On a side note, I saw one of your "Wire" actor boys at a backwoods Virginia party the other night to see a go-go music group. More than a little surprising to see...

^lol -- iw you leave the funniest comments. anyway, LOVE savion glover. sounds like a must see!

IW: One of those "Wire" actors is a go-go musician. The one who played "Slim Charles."

Judith: Can't believe I lived this long without seeing Savion Glover. I did see "The Tap-Dance Kid" way back when, but I'm 98 percent sure it was with Alphonso Rubiero in the role.

McCoy Tyner has been one of my fave pianists since his days with Coltrane....and with the recent death of Oscar Peterson....he has moved dam near to the top of my "Musicians I'd Like to See Before One Us Dies" list. One of my fave albums by him is The Real McCoy, one of the few he did which consists entirely of his songs.

Anwan “Big G” Glover is a member of The Backyard Band.

And, on the subject of Jazz, that Rahsaan Roland Kirk clip you posted is far and away, the BEST performance of Mysty I've ever heard, and I've heard dozens. He's one of my all-time faves in any genre and, along with Sun-Ra, one of the most intelligent, humble and giving people that I've ever met.

Des: McCoy Tyner played strong... but I was shocked at how weak-voiced he was, and how he shuffled creakily to and from the piano bench. And he's not even 70 yet. I don't know what the deal is.