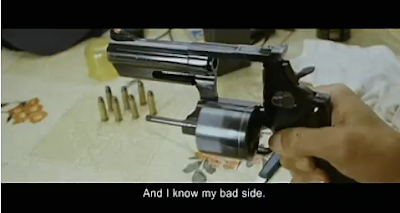 I never made it to see the Pras documentary “Skid Row” like I wanted to. But I stumbled upon an excellent doc a few weeks ago – “Manda Bala (Send a Bullet).”

It’s about the epidemic of kidnappings in São Paulo, the financial capital of Brazil and one of the most populated cities on Earth... a place where rich people live in high-rises that tower above the slums where poor people live.

But he paints a fascinating picture of the whole sub-economy that has sprung up to deal with the kidnappings: fleets of private helicopters to move the very rich from place to place; car customizers who specialize in bulletproofing; a plastic surgeon who specializes in rebuilding ears, because so many kidnappers slice off the ears of their hostages. (Kohn shows actual video footage of one such mutilation.)

He interviews a former hostage in her high-rise apartment... and also interviews a professional kidnapper (wearing a ski mask) in his slum dwelling. With a sharp eye for characterization, Kohn interviews cops, politicians and businessmen.

Plus, the film is pictorially beautiful.

As if all that weren’t enough, the “Manda Bala” soundtrack is wall-to-wall amazing Brazilian music. I went back to see it again... just for the music!

“Manda Bala” is rolling out slowly across the country. It opened yesterday in Chicago, Seattle, Dallas, San Diego and Washington, D.C. The week before that, it opened in Detroit and Minneapolis. Next weekend, it opens in Miami and Pittsburgh. And so forth.

If you enjoy stepping inside a moviehouse and being taken to a totally different place, I recommend you go out of your way to see “Manda Bala.”

Here’s the trailer.
Posted by Undercover Black Man at 12:54 PM

This sounds like a gripping film. I have Brazilian friends who have told me about similar experiences that you mention as a way of life. One of those friends mentioned to me casually in conversation how his mother got car-jacked-- like in a matter of fact manner.

"Oh, yeah, my mother got car-jacked once."

Yeah, what a life.

Hey, I wanted to ask you UnderCover, if you're up for an interview. I'm a writer/Stand-up Comedienne out of NYC and I would love to pick your brain about what it's like to be an "undercover black man".

Feel free to hit me up at my blog:
Quest For Comedic Stardom
http://standup10.blogspot.com

i didn't even know this movie was getting anything close to a decent US release. i just heard about it obliquely when Afflicted Yard did a photo essay inspired by it.

i need to see this. soon.

C&R: Thanks for pointing me to Afflicted Yard! Rickards's photography is amazing. I'm gonna ask his permission for me to post a shot on this blog. (Not from "Manda Bala," though... one of the glamour shots.)

I saw this movie last year at Sundance where it won the the Best Documentary award. It was amazing. Hands down the most exciting, visually stimulating, and complicated story I've seen in years. I can't wait until it comes out on dvd.