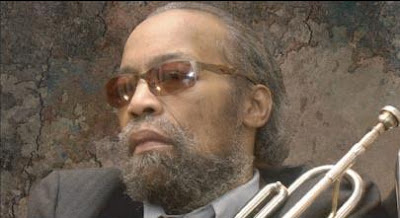 Hate to pass along more sad news from the world of music, but trumpet player Richard “Kush” Griffith has died.

Earlier this month in Louisville, Ky. (Griffith’s hometown), Maceo was among the musicians who performed at a fundraising benefit for Kush, who had been in poor health for some time.

Fred Wesley, in his 2002 memoir “Hit Me, Fred,” recalled how Griffith joined the James Brown band:

“[His] father was a bartender at the famous Louvillian nightclub in Louisville (an important stop on the chitlin circuit) and who had somehow gotten word that we needed a trumpet player. So he brought Kush... to the Freedom Hall to audition for the band.

“Kush didn’t have much experience playing jazz and funk, but he was an excellent trumpet player in every other respect. He had just come out of college and had real strong chops. Kush had no problems adjusting to the show and to the fellows, and we kind of looked at him as a little brother.... We have been lifelong friends.”

In between James Brown and P-Funk, Kush Griffith led a band called Bottom & Co., which cut an album for Motown in 1976. Click here to hear “Do a Funky Thing Together” off that LP. Kush delivers a tasty trumpet solo about 2 minutes in.

On the 2002 CD “The J.B.’s Reunion: Bring The Funk On Down,” Griffith contributed a pair of songs as co-writer and lead vocalist. Click here to hear “Do the Doo.”

I give thanks to Bob Davis of Soul-Patrol.com for sharing this unfortunate news.
Posted by Undercover Black Man at 8:08 PM

What sad news, UBM. I had heard of that benefit but had no idea is was that sick. Bummer.

You had heard of this benefit... in Louisville? I'm curious... how'd you hear?

Kush was the real deal on the horn man... In the late 70's I had a chance when I was with Evelyne Champagne King I had a chance to play several dates with P-Funk, and Bootsy... One of the shows was Charlotte the other Winston-Salem... In Winston the entire mob played together.. All of Bootsy's people and George's people that was Seven Horns laying down all the Funk... That night Kush, Bennie and Rick Garnder all hit this incredible Altisimo B natural almost and octave above high C... I knew then that these guys were the REAL DEAL.... Great musicians having fun... SO IF YOU SEE MY MOTHER TELL HER KUSH IS ALRIGHT... JUST PLAYIN THAT FUNK FOR FUN.. Rest in peace my brother you set the bar REAL high for us horn men... Rick, Fred and Maceo we will also keep you guys in our prayers because we know you guys were THE BOMB.. The Horny Horns live on....

^ Thank you for this, Bill.

Undercover, you know I got some stuff we did with Kush too?

How do I get in touch with you ?

I also posted over on Soul Sides on this:

Hit me on the Pmail: