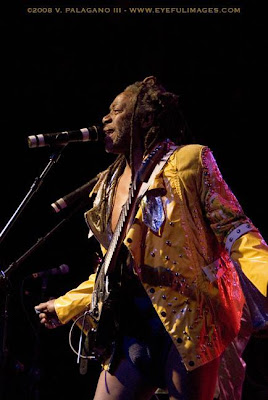 Word comes via the online grapevine that Garry Shider of P-Funk has been diagnosed with brain cancer.

Shider has been a loyal soldier in George Clinton’s musical army for nearly 30 years... a guitarist, songwriter, vocal arranger and diaper-wearing hype man.

And, of course, a singer. Garry Shider is an amazing singer.

To channel some loving energy in Garry’s direction, let me stream a couple of 1970s tracks on which he wails.

Click here to hear “Sexy Ways.” You’ll notice... it ain’t just about how Garry swings a lyric. It’s about the vamping he does between lines.

Then click here and listen to “Baby I Owe You Something Good,” with special attention paid to the second verse (“I’ve loved, I’ve lost...”). Simply mindblowing.

I had the pleasure, alongside my colleague Larry Alexander, of interviewing Garry Shider back in the ’90s for a P-Funk oral history. He was generous with his time and cool as can be.
Posted by Undercover Black Man at 10:44 PM

Damn. Terrible news. His voice on Cosmic Slop fits the tone of the song perfectly!

That's awful. Do you know whether it's something they can remove surgically?

^ I don't know about any of that, David. But here's a Facebook status update that Garry himself posted 24 hours ago:

"But I am a little under the weather. I Thank you all very much for your prayer and well wishes! It means the world to me to know that you all love and support me in my time of need. I can feel the positive vibes and it helps.

"I'm up and alert and my normal self, so stop worrying. Just keep praying. I'm gonna get better!"