Today I’m streaming tracks by four recording artists with something in common. These men are notable not just for making music... but for taking a human life. All four ended up convicted killers.

(Isn’t this a cool concept for a playlist? I semi-ripped it from another blog: Any Major Dude With Half A Heart.) 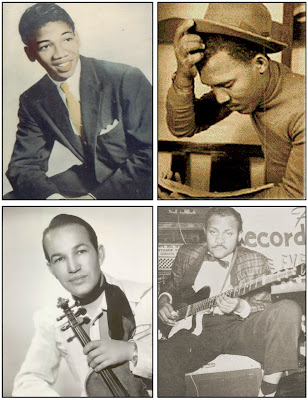 A 1950s R&B hitmaker who would influence James Brown, Little Willie John was the first to record “Fever,” a tune made much more famous by Peggy Lee. I never knew about this original version, though it was a million-seller.

Now a member of the Rock & Roll Hall of Fame, Little Willie John died in 1968 as an inmate of Washington State Prison, serving time for manslaughter. Several years earlier, the volatile little man stabbed a guy during a fight.

Trombonist and composer Don Drummond, a founding member of the Skatalites, was one of Jamaica’s greatest musicians. He was also mentally ill. Drummond died in a Kingston mental asylum in 1969, put there after murdering his girlfriend, an exotic dancer.

Fiddler and bandleader Spade Cooley was a country-western star. He had a popular show in L.A. during the early days of television. This recording, “Shame On You,” was No. 1 on Billboard’s country chart for weeks in 1945.

Spade Cooley’s enduring legend, however, has not to do with music. In 1961, he beat and stomped his wife to death after an argument. Did it in front of their teenage daughter. Cooley was sentenced to life in prison, and he died of a heart attack in 1969.

Dennis Quaid has been trying for years to get a movie made about Cooley.

Catchy title, huh? Memphis bluesman Pat Hare cut this track for Sun Records in 1954, but it wasn’t released until 1990... long after Hare had actually murdered his baby and died in prison.

A guitar player with a distinctively aggressive sound, Pat Hare gigged and recorded with the likes of Muddy Waters and Bobby “Blue” Bland. Hare moved to Minneapolis in the early ’60s to perform in Mojo Buford’s new band.

Alas, in 1962, a domestic dispute ended with Hare shooting his girlfriend dead. He also shot and killed a policeman who responded to the call. Hare got a life sentence.
Posted by Undercover Black Man at 7:18 AM

Don Drummond (aka in Jamaican patois as "Don de Lion") was a great trombonist.
I once read (or heard) a comment by Wynton Marsalis that his youngest brother had opted for the trombone as his instrument of choice but Wynton was concerned that the trombone would limit his brother's chances to solo.
I thought then that he should give his brother a collection of works by Don Drummond and the Skatalites.

My Mother had copies of Little Willie Johns " Fever"and"Need Your Love So Bad," "Suffering with the Blues," I still love all three.
Thanks for this because i never knew what had happened to him.

Macabre twist on the playlist theme. I knew the name "Little Willie John" but didn't know about his crime or the crimes of the other musicians. Talk about jailhouse rock.