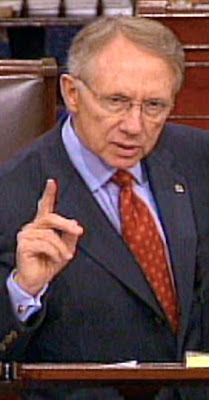 The burning controversy about Sen. Harry Reid’s old comment about Barack Obama is such a waste of time. The comment wasn’t insulting, wasn’t shocking... and was likely true.

In case you haven’t heard, Reid reportedly remarked that Obama was electable because he was light-skinned and had “no Negro dialect, unless he wanted to have one.”

As for Obama adopting a Negro dialect if and when “he wanted to have one,” consider this old Obama campaign vid, which I recall blogging about in 2007. Check Obama’s pronunciation of “alligator.”

Posted by Undercover Black Man at 5:59 AM

Politically incorrect is saying something off-color like using the term Leroy or boy when speaking of a Black person in caricature. What Harry Reid stated was 10x more racist than calling someone an N-word and I’m willing to best most Black people do not even realize it. What Harry Reid stated was a subtle racist tactics of liberals who seek to validate African-Americans that talk like them or speak like them.

Most conservatives don’t give a damn about Black people whether they light-skinned or dark-skinned, they don’t like anything non-White. However, when it comes to liberals, especially in the media, you will see liberal racists propping up a light-skinned person what talks like a White person. CNN made me laugh when they tried to take this issue on when they need to look at their own hiring preference for African-American journalists.

But there is a more sinister statement that many Black people are choosing to ignore. Harry Reid stated “unless he wants one” and that statement alone shows the true intent of Harry Reid comments. What that comment essentially meant was Obama can get a Negro dialect when he wants to speak back to the African-American community. In other words, Harry Reid sees light-skinned people like Barack Obama as tokens that he can use.

What Does “Light-Skinned/No Negro Dialect Unless He Wants One” Really Means?

I found it interesting that you and Ed's orthogonal takes on the subject would be juxtiposed on my links clique first thing this morning.

Perhaps fruitful discussion here, there, and wherever else interest is served - can result from this moment in ideological diversity?

^ A teachable moment, you mean? Have at it, brah.

Nah, more of a serendipitous links moment. I have no dog in this hunt one way or tother.

You say that Reid's comments are of no consequence, Ed says otherwise.

Personally, I code switch down to the microsynchronization of body language and think nothing of it.

you know what's sad about this video? the fact that obama "who voted against the war" authorized more troops for afghanistan. betcha the retired "sgt. major" is disappointed, too.

That nigger Harry Ried is crazy!

You neglected to point out that Senator Reid's assessment and statement are both accurate.

It is not unusual for politicians to display different personalities to various constituents when running for office or when gathering support. Sen. Reid noticed and said something. 200,000,000 other Americans noticed and did not say a word.

Barack Obama was by far the best candidate and will prove to be a great President. But, he speaks differently on "60 Minutes" than at the barbershop. The funny thing is I am rather certain his "barbershop' dialect is not allowed by anyone in his family at the dinner table.

I recall Hilary Clinton getting in trouble for turning on her Negro dialect at a church last year.

^ You shoulda heard her Yiddishkeit when she ran for Senate in New York!

He also conveniently turned on his "negro dialect" when he went to Ben's Chilli Bowl with DC mayor Fenty. Gotta love politicians. Oh wait, Oprah does this too.