So as soon as my plane landed this morning, I rolled to my favorite diner – the Woodside Deli in Silver Spring – to get my scrapple- and-grits on.

And whom did I overhear in there but a cat talking about Michael Jackson like he knew him personally. 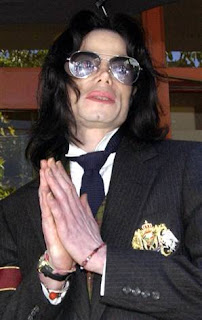 “I even know how he died,” the guy told his breakfast companion. “But I won’t say.”

Later on, ol’ dude said: “I hope they cover up the autopsy report.”

What made me pay attention was the fact that this gent wore a Majic 102.3 baseball cap and T-shirt. And there was a Majic 102.3 SUV parked out front. Majic 102.3 (WMMJ) is the top “urban adult contemporary” radio station in Washington. A Cathy Hughes joint.

I still don’t know who this guy was. But from what I picked up, his dining buddy was his producer.

Producer-man didn’t reply when Mystery Dude gassed on with this: “I used to drive Michael to Bible study at the Kingdom Hall.”

And this: “It was Marlon Brando who convinced Michael to leave the group. I said at the time, ‘Man, that’s a mistake.’ ”
Posted by Undercover Black Man at 9:00 AM

You didn't just say that you were eating scapple did you?? *LOL*

Oh my gosh!!! *covering my mouth in horror*

The toxicology report will be released soon.

Demoral injections is what folks believe.

^ Nope. Hard to describe if you've never had it.

You in the Midwest or what, dude? I lived in Chicago for a while, and those people never heard of it.

Had to look it up:

Scrapple is typically made of hog offal, such as the head, heart, liver, and other scraps, which are boiled with any bones attached (often the entire head), to make a broth. Once cooked, bones and fat are discarded, the meat is reserved, and (dry) cornmeal is boiled in the broth to make a mush. The meat, finely minced, is returned, and seasonings, typically sage, thyme, savory, and others are added. The mush is formed into loaves and allowed to cool thoroughly until set.

^ I know, right? How have you lived without it?

Interesting comments on the MJ autopsy:

Dude, you're back for a week and we lose Michael Jackson? I'm telling you UBM, you're messing with powers bigger than all of us. Please stop now before you take out half of Motown and the rest of Stax/Volt.

Well, I have a feeling that MJ may have been under some outside controlling "influence", which may have led him astray from the other path he was on. I think of Barry White and Issac Hayes, how they were "handled" prior to their deaths.
Hollyweird.

Was going to respond otherwise about Michael Jackson but then saw that - absolutely no joke - the word verification for my comment was MOLEST. Eerie

Grits and scapple! I thought that was just a Philly thing. I just landed Stateside on Friday. I need to add them to my list of things to eat. I guess you have to be from the mid-Atlantic to appreciate scrapple.

Glad to have you back, albeit part time.

^ Thanks, GG. I been missing the commenters.