Ever since that Korean student kirked out and committed mass murder at Virginia Tech, right-wing blogger Lawrence Auster seems obsessed with immigrants who kill. 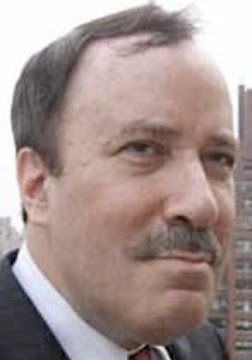 Pardon me... with non-white immigrants who kill. Be they in the United States, Canada or England.

The recent shooting rampage by a Vietnamese immigrant in upstate New York has inspired Mr. Auster to dark cleverness. Today he rewrote the famous poem at the base of the Statue of Liberty:

“Give me your head- cases, your screwy,
Your huddled mass murderers yearning to shoot free,
The angry misfits of your teeming shore.
Send these, the unassimilable, to me...”

Never mind the fallacy of Auster’s argument that a few mentally ill Asians reflect upon the “assimilability” of non-whites into white societies.

Forget the fact that whenever Auster chooses to write about a white murderer (which he does rarely), race is somehow never relevant.

There is a bigger irony here. Lawrence Auster has direct knowledge of a “killer immigrant” within his own family.

Indeed, one of Anna’s sons – 9-year-old Irving – was an eyewitness and had to testify at the murder trial. (Anna Auster was found not guilty by reason of temporary insanity.)

Young Irving would grow up to sire a son of his own: Lawrence Auster.

How do I know about this killing? Because Lawrence Auster’s cousin – the novelist and essayist Paul Auster – wrote all about it in a 1982 memoir called “The Invention of Solitude.”

I bring it up now for this reason: By Larry Auster’s logic, the fact that his immigrant grandmother became a killer justifies the anti- immigrationists of the early 20th Century who wanted to stop the flow of Eastern European Jews into America.

I would love to see Mr. Auster address this irony.
Posted by Undercover Black Man at 1:26 PM

Man. Family reunions in the Auster family have got to be a little weird.

The recent shooting rampage by a Vietnamese immigrant in upstate New York has inspired Mr. Auster to dark cleverness.

This guy is obviously a byproduct of the polarization of politics today using wedge issues as divisive agenda driven material. As an immigrant myself, it is this very "talk" that has led to any much needed reform concerning the issue.

This dude's a piece of work. Just because a few asians went buckwild, he's going to ignore the fact that dozens upon dozens of stateside-born-in-the-usa whackjobs have been doing the same thing for decades? I wonder what he has to say about serial killers? To quote a comedian (can't remember which) "I'm not saying that all white people are serial killers...but all serial killers are white people.

I wonder what he has to say about serial killers?

I hear you, FunkyHeadHunter. And what about killers of children? Whenever you hear on the news about some 10-year-old white girl who comes up missing... you just kinda know she'll likely be found dead at the hands of some sick white bastard like Kevin Ray Underwood.

It took a long time for Irish and Jewish immigrants to America to be seen as white.

One of the first things I thought of reading this is how traditionally in America the way immigrants become white is define themselves as not black.

What a dick. Does it ever occur to him the pressure of racist attitudes like his might contribute to the erosion of struggling immigrants' mental health?

Oh and kudos for the use of "kirk out!" I like it better than crazy because it implies you can captain a ship but you might kiss a few aliens along the way.

Maybe this would not be so ironic if you consider that LA is against everything most American Jews stand for. From a right-wing perspective, Jews haven't been assimilated (70% vote Democrat, case closed), and allowing them to immigrate was a disaster, rare exceptions like LA notwithstanding. If LA doesn't acknowledge this, it's just because he makes an "unprincipled exception" for his own people.

As for white serial killers, most serial killers are white because most Americans are white. There are plenty of black serial killers - here's a list found with 10 seconds of googling. Just because blacks aren't grossly overrepresented like they are with so many other forms of crime doesn't mean they're absent.

This clown brings out the intellectual beast in you. You are at your best when you expose his hackery.

BTW there was an African American man convicted of a serial killing in late 1990 or early 1991 up the road in Sacramento. Also, there was another African American man convicted of serial killing out here in the sticks late last year. That said I tell me if Jeffrey Dahmer was anything but white the cops would have let the beat to shit, scared out of his mind Asian kid back in the home for dinner and dessert.

While I realize that of course there is such a thing as a black serial killer--hell we've got one in L.A that's been doing it for 23 years--the fact remains that the ethnicity of an individual committing a crime doesn't seem to be an issue in the media unless the ethnicity happens to be non-white. For instance, the media made it a point to state the the man who killed all those people in NY last week was asian. However, there was no mention of the ethnicity of the man in Pennsylviania who killed 3 cops in a 4 hour standoff. He was white, by the way. In fact with all the "rampages" that have been going on over the past month, the ethnicity of the killers hasn't been an issue with the majority of them since the majority of them are white. Ultimately, ethnicity shouldn't ever be an issue in these situations because crazy is the only thing that truly crosses color lines.

There were two deadly shootings that happened at around the same time--the New York Immigrant office shootings and the 3 cops killed by the Stormfront guy. Guess which one White Nationalists have been excited about.

I never read Auster's comments about Vincent Li (the guy who killed someone on the greyhound) until now; that shit makes my blood boil.

When I hear people talk trash about Vincent Li I LOSE IT. He was obviously mentally ill and killed the other passenger in a psychotic episode. He begged police to kill him for what he had done when he realized what had happened. This will haunt him and his kin forever.

None of the stories in the paper focused on the fact that Alberta, his province of residence, has an abysmal mental health system, or the fact that being an immigrant seasonal laborer would have made it difficult for him to access medical help before he snapped.

I think you might have found Debbie Schlussel a husband.

Congratulations to you, Undercover Black Man, for exposing these facts!

Isn't it ironic, he who protests the loudest…