I’ll go out on a limb and say the electric bass is the cornerstone of funk. Bootsy, Graham, Stanley Clarke, enough said. When the bass is hittin’, the track is hittin’... even if we’re talking about the “Barney Miller” theme song.

So for funk fans, a white cat who can rip shit on the bass earns a special respect... be it Flea on the rock side, Les Claypool on the alt side, or John Patitucci on the jazz side. 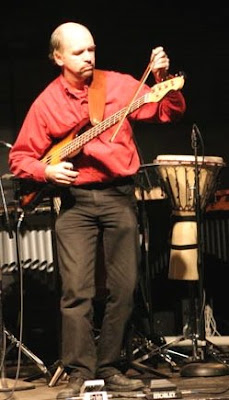 Most funk fans have never heard of Jack Vees. Which makes sense, because he’s not a funk musician. In fact, his “serious music” credentials are so serious, he’s on the faculty at Yale.

But Vees played for a while with the progressive rock band Forever Einstein, and he has a couple of solo discs to his credit.

And I do mean solo. His 2000 CD “The Restaurant Behind the Pier” features nothing but his bass playing, artfully overdubbed.

Vees is all about exploring sonics and technique. Click here to hear his one-man version of Jimi Hendrix’s “Manic Depression.” It might not be funky, but it’s certainly funk-ish... and tasty all around.

This track is available as a FREE MP3, courtesy of Firehouse 12, a New Haven jazz space. To commence downloading, hit this link.
Posted by Undercover Black Man at 8:42 PM

I'm gon check him out. Your first paragraph on this post is some of the truest shit ever, ya know, when you add Mark Adams and Louis Johnson to that list! The electric bass has always been my favorite instrument, ever since I heard Slave's "Stone Jam" when I was a lil one. I've always wanted to learn, but I could never afford them lessons.