Only after the Twin Towers had been destroyed did I learn about the special role that Mohawk Indians played in constructing them. 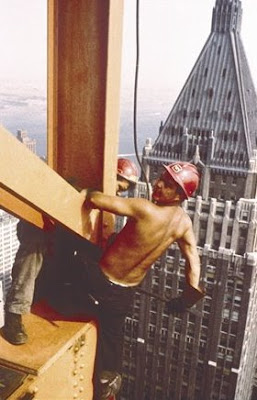 For more than a century, Mohawk ironworkers have had a reputation for embracing the dangerous job of building bridges and skyscrapers.

They worked on the Empire State Building, the Sears Tower and the San Francisco Bay Bridge.

This being American Indian Heritage Month, why not take a minute and listen to one of these workers reminisce? Click here to hear Peter Stacey from the Kahnawake Mohawk Territory in Quebec, Canada.

To hear others, follow this link to the Sonic Memorial Project; where it says “Search by theme,” select “Mohawk Ironworkers” in the drop menu. 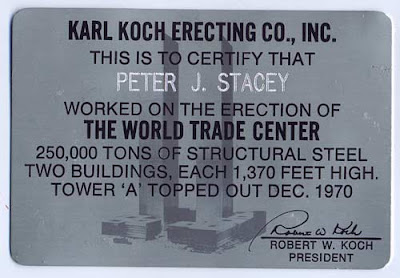 Posted by Undercover Black Man at 11:56 AM

That's great for the Mohawks and all, but wouldn't it be awesome to have a plaque that had the word 'erection'?

^ Expecially if your name is "Peter."

Joseph Mitchell (named dropped in The Wire season 5's newspaper talk) wrote about these guys in "Mohawks in the High Steel." Gay Talese also alludes to them in "The Bridge," his book about the building of the Verrazano-Narrows Bridge. Mitchell references that they all lived in the Gowanus section of Brooklyn, where I live now, but the bars he talks about them hanging out in are long gone.

I heard Native Americans put the finishing touches on the top of the St. Louis Arch, too.

^ Them dudes got around.

I worked in downtown Baltimore in the early '70's when the USF&G building was erected. I was told these Indians were from Canada. Not all, but many of them would stop by a little restaurant every morning on Calvert Street and drink a beer or two and buy miniatures BEFORE they climbed up. I was also told when they had to urinate, they actually would do so outside and the liquid would vaporize before it reached the ground. It was fascinating to watch them walking on beams 300' above us as freely as we did on the pavement.

Shortly after moving to NYC, I was lucky enough to catch an exhibit on Mohawk steelworkers at the Museum of the American Indian. Crazy stories.

But to be honest, my first exposure to this historical tidbit came from the movie "Wolfen", which I saw on video when I was about 12. I thought it was pretty badass at the time, and reading about it now, it still sounds pretty cool.

... but many of them would stop by a little restaurant every morning on Calvert Street and drink a beer or two and buy miniatures BEFORE they climbed up.

I was also told when they had to urinate, they actually would do so outside and the liquid would vaporize before it reached the ground.

Well, that begs another question, doesn't it?

Stumbled on your post as I was writing about the Mohawks who used to to to Farell's, just south of Park Slope. I come from Montreal originally, and was in the city during the standoff in 1990, when both Khanawakhe and Khanasatakhe (most of the iron workers I believe came from Khanawakhe) were surrounded by first the Quebec provincial police then the Canadian army, 6000 Montrealers were cut offf rom the city by the Mohawk blockade of the Mercier bridge, and the whole city felt like it was occupied.

Amazing history - the Mohawks were one of the five nations that made up the Iroquois Confederacy, which at one time controlled most of the Great Lakes area, played off the British, the French and the Americans, and were still influential enough to hold a seat at the League of Nations until, I believe, 1929. Another piece of N. America's largely unknown history . . .

Thanks for the links - I'll link back on my post.