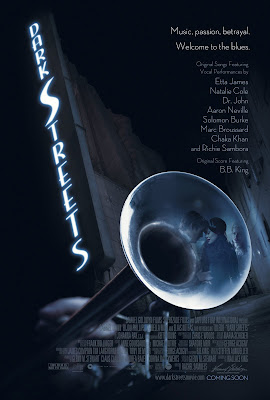 Due in December is a movie called “Dark Streets,” a stylized murder mystery that has something to do with a nightclub. The trailer is embedded below.

The thing that has me interested is the soundtrack. It will include original songs performed by the likes of Aaron Neville, Etta James, Natalie Cole, Dr. John and Chaka Khan.

The score will feature B.B. King on guitar.

Maybe I’ll buy the album and skip the flick.

(By the way, that too-cool-for-school emcee character is played by Toledo Diamond, an L.A. cabaret figure.)

Won't be running down to the multiplex to see this one! (Not that it would come to Switzerland any way.) Soundtrack sounds terrific though.

^ (Not that it would come to Switzerland any way.)

I wonder, Geneva Girl. Something about the "Cotton Club"-meets-"Moulin-Rouge" vibe makes me think they had Europe in mind as a market.

It didn't have a European vibe to me. Most flicks don't come here any way until they're on DVD. I'll keep you posted if it does show up.