Stew is the toast of Broadway! (Mmmm... stew and toast.) 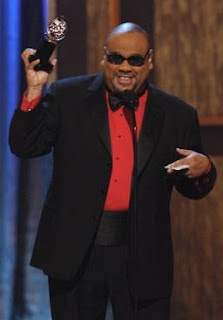 I have blogged before (here and here ) about Mark Stewart, a.k.a. Stew, former front man of an L.A. band called The Negro Problem.

Well, I’m blogging about him again. Because on Sunday night, Stew copped a Tony Award!

He won the Best Book of a Musical trophy for authoring the hit show “Passing Strange.” (Thanks for letting me know, dez.)

This show has also won an Obie Award for Best Musical, as well as a Drama Desk Award and a New York Drama Critics’ Circle Award.

Congratulations, Stew, to you and your creative partner Heidi Rodewald. Your fastidiously literate lyrics and saucy adult wit make you a true credit to the Negro people.

Below is a 10-minute “Passing Strange” pupu platter, performed by the cast a month ago at the Obies.

I am so bitter that I don't live in NY anymore!

Seen it. Loved it. Recommend it! The soundtrack is on iTunes. Don't be surprised if we soon hear of a big screen adaptation.

Don't be surprised if we soon hear of a big screen adaptation.

Love Stew!
So glad to know about his success.
Thanks for that.

^ Thanks again to you for turning me on to him in the first place.

I have some original Negro Problem CDs purchased at their shows. Who wants to start the bidding? :-D

^ Those things have crazy price tags from Amazon sellers, dez.