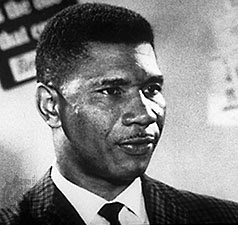 Civil rights activist Medgar Evers was assassinated on June 12, 1963... shot in the back by a rifleman outside his Mississippi home.

A former Ku Klux Klansman was convicted of the crime... in 1994.

The murder of Medgar Evers shocked white America. Young balladeers wrote songs about it... most famously Bob Dylan’s “Only a Pawn in Their Game.” Phil Ochs wrote “The Ballad of Medgar Evers,” and Dick Weissman wrote “Medgar Evers Lullaby.”

My earliest recollection of hearing the name Medgar Evers was an episode of “Good Times.” (Young Michael Evans, the “militant midget,” kickin’ the knowledge.)

I never heard Medgar Evers speak with his own voice until last year, when I found a minutelong track on the album “Sing for Freedom: The Story of the Civil Rights Movement Through Its Songs.”

Click here to hear “Medgar Evers Speaking.” This recording was made shortly before his assassination.
Posted by Undercover Black Man at 12:38 PM

He was a good man who fought the good fight. We are all (black and white) indebted to him.