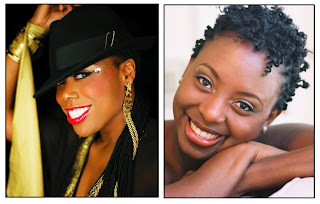 Speaking of Prince... the L.A. Times pop-music critic Ann Powers embarrassed herself this week with her review of Prince’s show at the Coachella music festival.

To be honest, I don’t know Ledisi from Shelby J. either. (Ledisi is pictured on the right.) But if Ms. Powers can’t tell Sheena Easton from Chaka Khan, she needs to see an ophthalmologist.

Here’s the correction published by the L.A. Times on Tuesday:

“A review in Monday’s Calendar section of Prince’s performance at the Coachella Valley Music and Arts Festival said that Sheena Easton performed with him on ‘I Feel for You.’ It was Chaka Khan who sang with him. The review also said that Shelby J sang a cover version of Sarah McLachlan’s ‘Angel.’ That performance was by Ledisi.”

Wow, that's... that's one of those stupid moments that just leaves you speechless. Sheena Easton and Chaka Khan? She got those two confused? Was she even at the show?

Jesus. H. Christ. Just when I think the well of MBP will run dry, there's another one. Ledisi's a local (Oaktown) favorite. Sad to see her join the ranks of the misidentified. But then again, maybe being misidentified means you have ARRIVED!

UBM, you do not plé!

But then again, maybe being misidentified means you have ARRIVED!

Yeah, guess you gotta look on the bright side. :P

Interestingly, the online review has been corrected.