No, not the kind of unusual black names you’re thinking of. (I got nothing but love for ya, Kwanise.)

Whilst on the internets, reading about the recent political history of Zimbabwe, I came across the name Happyton Bonyongwe. He’s the head of Zimbabwe’s national spy agency, the CIO.

Unusual name, I thought. Then I came across a Zimbabwean journalist named Brilliant Pongo. 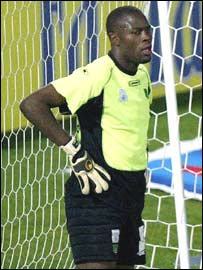 There’s a saying in journalism: “One is an incidence. Two is a coincidence. Three is a trend.”

So I dug a little deeper and, indeed, found other unusual Zimbabwean names:

Such names may be unusual to American ears... but they aren’t unusual in Zimbabwe. One of that nation’s finest novelists is named Shimmer Chinodya.

The New York Times even did a feature article about Zimbabwean names last October, quoting Hatred Zenenga, Godknows Nare and a fellow named Enough. (Explaining this, Enough said: “My mother had 13 children. And I was the last one.”)

I love learning about these kinds of cultural peculiarities.

Benhilda Chanetsa, a freelance writer in Harare, described the phenomenon in a fascinating online article.
Posted by Undercover Black Man at 1:56 PM

One African applicant to the program here was a guy named "Innocent."

One student of the program was named Constance Vigiliance. However, I can't remember if she was African or from the Caribbean.

Hey how about that..."Hilarious Mpoko" could be a new name.

Cool theme here UBM. I'm also a big fan of Pilipino names. Here's some more randomly found by google. (I like this history of surnames in the Philippines too)

One African applicant to the program here was a guy named "Innocent."

The more I see of this, the more I like it. Think we can get this trend going in the U.S.??

I had a boyfriend shoulda been named "Trifling" LOL

I will never complain about my name again lol.

you think maybe Akon tried that first then decided to change it?

"Oh, please! Why burden our children so unnecessarily just for the sake of feeding our misguided ego?" a columnist complained. "Quite frankly, these names amount to a form of child abuse."

That was an interesting NYTs article. Really, though. Don't parents think of the children?

I thought the name "D'Brickashaw"* was jacked up, but there's really no excuse for "Never Trust a Woman."

*I figured Ferguson's mom must've loved "The Thornbirds", but why the ghetto spelling? Daaaaang!

^ I knew a brother in high school named after D'Artagnan of "The Three Musketeers." Spelled Dartagan, though, if I remember right.

But be honest... wouldn't "Jealous" be a fly-ass ghetto name?

Shaniqua still sounds weider than any of the above mentioned names

We say a guy from Liberia, I think, interviewed on the BBC. His name was Learnmore. We were LOL!

Here's a chuckle about black folks naming their kids:

Now that I've re-read it, I'm wondering who wrote it. Still, it's funny.

Slate did this one a couple of years ago about Super-black baby names.

"David". Hilarious name for a European or a West African. Odoaker would be more authentic. Merlin, too.

Why the fuck do you like to play these racist games, David?

Why the fuck do you like to play these racist games, David?


I sure hope you're joking, Michael.

I'm serious. Those are the kind of games they play on stormfront.org and the VNN forum.

"Kenyan parents are no different from parents anywhere else in the world necessarily, but they do love to name their kids after headlines" e.g. Bill Clinton Okumu.

I was just watching "The Face of Africa," a model search show. (There was NOTHING else on TV and I was too lazy to get up and get a book.) The last model picked for the semi finals in South African was Greatmore from Zimbabwe.

Could you imagine the Cover Girl ad with Greatmore?