I first played around with this theme last summer. Now, I’ve got a theme within a theme: hippie music!

Below are some familiar tunes from the golden age of psychedelic rock... interpreted by black artists. Click the song titles to hear the tracks. Hope you enjoy ’em. 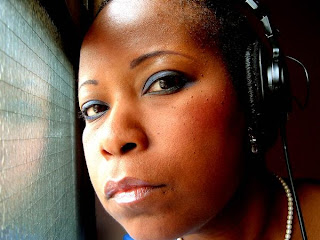 The blogger known as estiv got me moving on this idea when he uploaded a cool Jefferson Airplane video clip this week.

I had recently stumbled on this dub-style version of “White Rabbit,” cutely sung by Brooklyn rocker chick Honeychild Coleman. It’s off the 2003 CD “Shiner Massive Soundsystem.”

Funkadelic guitar god Eddie Hazel didn’t often sing... but when he did, he made it count. This Mamas and the Papas cover is a soulful slice of vintage P-Funk, produced by George Clinton. Downloadable from iTunes and Amazon. 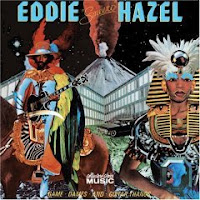 UPDATE (04/27/08): Something trippy happened last night. I was at the Gibson Amphitheatre for a Chris Rock show. They had a 20-minute intermission after the opening act (comedian Mario Joyner). During that time (as before the show) a mixtape boomed over the sound system.

And this track was on it. Eddie Hazel’s “California Dreamin’.” I mean, you have got to be seeerious about yo’ funk to put this bad boy on a mixtape.

What are the odds? On the very same day that I post about this obscure recording, I encounter it in the real world? A million-to-one, I say. 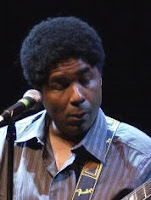 This Joni Mitchell classic has one of those melodies that I’ll always associate with childhood. Singer-songwriter Chris Thomas King gives it a faithful reading in this 2006 recording.

Downloadable from iTunes, eMusic and Amazon.

I don’t know why Jef Lee Johnson, one of my favorite funky musicians, chose this song to cover. Then again, he’s also covered a Monkees tune. Maybe it’s his sense of humor.

“Mellow Yellow” was written by the U.K. folk-rocker Donovan, and it’s one of those ’60s songs that’s presumed to be about drugs. (“Yo, don’t bogart the banana skins!”) This version is downloadable from eMusic.

Only while preparing this list did I download this track. And then I realized I know this version... all the riffs, the changes, the big finish. It totally skipped my mind that Natalie Cole had a small hit with this Beatles song in 1978. Nice to hear it again.

It’s downloadable from iTunes and Amazon.
Posted by Undercover Black Man at 2:45 PM

Hey! I was wondering when you'd do something like this again! I especially thought about it after downloading a Tavares greatest hits comp that has the cover "Free Ride" by Edgar Winter Group on it.

(Actually, I only found out it was by EWG, like, two minutes ago, but I knew a rock group did it.) Don't know if they're psychedelic rock, though, but I like it nonetheless!

I was thinking it'd be cool to see a real BSWS compilation. I would love to hear Macy Gray cover the Black Crowes' "Remedy."

Anyway, thanks for posting!

Keb Mo does a nice version of Big Yellow Taxi, too. We had free tickets to see Natalie Cole Friday and Mr. Belle didn't want to go!
Have you ever heard of Lucretia? Her album is called Altjid Over Liefde. Nice voice.

What are the odds? On the very same day that I post about this obscure recording, I encounter it in the real world? A million-to-one, I say.

Just a second before I came here, I was looking for a podcast I'd downloaded on...guess what? Coincidence.

Buddy Miles: Down by the River (Neil Young) on his Them Changes LP

Undisputed Truth also does Down by the River on their Cosmic Truth LP, and they also do Dylan's Like a Rolling Stone on their first

and you could do a whole section on the Isley Brothers, whose covers include It's Too Late (Carole King), Ohio (CSN&Y), Fire and Rain (James Taylor), Lay Lady Lay (Dylan), Love the One You're With (Steven Stills), Hello It's Me (Nazz/Todd Rundgren), Don't Let Me Be Lonely Tonight (James Taylor), Listen to the Music (Doobie Brothers) and Summer Breeze (Seals and Croft)

... the Isley Brothers, whose covers include It's Too Late (Carole King)...

That one's coming up soon, Robert...

Damn, I love how Ronnie sings this joint! (I love the S&C version too!)

I've thought about songs covered by the J-5, but I've never thought about all the tunes the Isleys have covered. Good call! :thumbsup:

Honeychild used to work at this second hand store I frequented in Berkeley. She was very sweet, but I always thought her style was waaay more suited for New York. It was off the hook! I started spotting her in different mags (surprising), and now look. God bless her.

And check out Aretha: she does a stack of white covers. Goovin' (Young Rascals) on Lady Soul is one of the best, and it's definitely Summer of Love material, but does a black cover of a white R&B song count?

How about Al Green's To Sir With Love (Lulu) from Truth N Time, where he switches up the Sir to be God instead of Sidney Poitier.

It's almost too easy to grab Motown singers, but Stevie Wonder did a lot of great covers, especially in the late 60s. Light My Fire (Doors) and We Can Work It Out (Beatles) are just two...

IW: How cool that you knew Honeychild back when! I need to get up on Apollo Heights... I believe she plays guitar with that band. Michael Gonzales shined a spotlight on 'em last year, and I keep procrastinating.

thanks for the shout;)
Honeychild Coleman

^ Thanks for stopping by, Ms. Coleman!