I have dez to thank for motivating me to get off my haunches and go see Chris Rock at the Gibson Amphitheatre.

I caught him on Saturday, the last night of a four-night stand. Place was packed. I even saw a couple of celebrities... unlikely celebrities, I would have thought, for a Chris Rock show: Two older Jewish cats who are big names in show business. 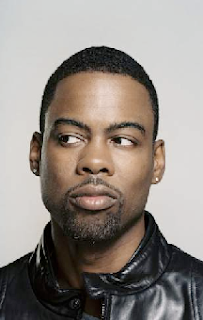 I won’t make you guess who... but I’ll reveal their names in the comments section, just in case you want to wonder for a minute.

The first part of his set was devoted to the presidential race. He joked about John McCain’s age. (“He used to own Sidney Poitier!”)

He boosted Barack Obama. (“We have never seen a brother this cool and legal. He’s on some Don Cornelius shit.”)

Rock didn’t break much ground with his discussion of the N-word either.

“For the first time in the history of the world, white men have to hold their tongue.” And if white guys don’t like it, Rock proposes this: “Wanna trade places? You scream ‘nigger,’ I’ll raise interest rates.”

No doubt this tour will result in a new HBO special.
Posted by Undercover Black Man at 6:39 PM

The celebrities I saw in the audience Saturday night were: Rob Reiner (and family) and David Mamet (with his wife, Rebecca Pidgeon).

^I was thinking Jackie Mason.

Only C+ though, huh? I like Rock; I'd watch this tour if it airs on HBO.

Only C+ though, huh?

Rock is a funny guy but I don't really like his delivery. Bit too abrasive...

I love Chappelle's delivery, and the weird (but hilarious) Jim Gaffigan.

I agree about the high standard, but yeah, I disagree with your grade.

This is why I'm going to do my good work last.

^ Maybe he's just too rich-'n'-comfortable. Matter fact, I forgot to mention that Chris does a chunk of material in the middle of the show about how "rich" he is...

... and that rubbed me wrong. He tried to make it about other topics -- like how his kids don't appreciate what they got, etc. -- but still...

^I thought he was pretty self-deprecating about it, though.

If y’all want another point of view, Teresa Wiltz of the Washington Post reviewed Rock’s show in D.C.

There were celebrities in the audience there, too... if you define “celebrity” broadly enough to include George Stephanopoulos and Roland Martin.

Only a C? That ones about Sidney Portier and the oval office made me laugh out loud second hand, in prose, with none of Rock's delivery. Are you sure.

I saw him in Cleveland while he was still working "No Apologies" out. Some funny stuff, but it was a little long. I can see the C+. I bought a hat though.

random aside: David Mamet has a new movie out with Chiwetel Ejiofor...dreamy

Teresa Wiltz is doing God's work :-D And I guess he's cutting some of his jokes because he went about 100 minutes at the show I saw.

George is a celebrity (i.e., a famous person), definitely, but not a star, heh.

The surprise was with these two particular alter kockers... who haven't displayed, through their work, any particular affinity for black culture.

By the way, Rob Reiner must've been especially tickled by one of Rock's best punch lines. About John McCain, Rock said: "I don't want a president with a bucket list."

It seems to me that Rob Reiner has always been involved with progressive politics and civil rights issues. And he must have a good sense of humor - he directed Spinal Tap!

bring the pain is the funniest chris rock has ever been. there was a passion there that i don't see anymore. you know how some people just stay angry about stuff? chris just seems over it. for instance, remember when he did political reporting for bill maher? he was hilarious. i don't find his political stuff as on point. he won't even give his opinion anymore. lucky i bought bring the pain and can watch it anytime i like...